Danario Alexander: From the 'Zou to the Lou

Now that Danario Alexander is officially a member of the 2010 St. Louis Rams I guess we can all quit worrying about that pesky little injury that knocked Mark Clayton out for the season, right? Alexander was promoted from the practice squad and given a four-year deal by the Rams as they attempt to shore up a significant weakness at the wide receiver position. Luckily for them, bringing in Alexander essentially solves all their problems, as he immediately becomes their best wide receiver, can return every kickoff for a touchdown almost automatically, and will help shore up the run defense against those pesky big plays. In short, our season is saved!
Well, not quite. The Rams are still short the most productive receiver from what was a rather thin receiving corps even with Clayton on the field, so things are most definitely not the best they could be. Still, as both a Missouri Tigers and St. Louis Rams fan, it is very exciting to see Alexander wearing the blue and gold after doing the black and gold so proud.
For those of you who may not be all that familiar with Alexander you're probably wondering what all the fuss is about. Part of it, of course, is just the fact Alexander went to Mizzou and we Midwesterners love our local talent. More than that, though, is the fact those of us who do follow the Tigers have gotten to see what kind of a talent Alexander is, and just what kind of an impact he could make at the game's highest level.
To start, he has great size for a wideout, at 6'5" and 215 lbs. That's on par with with receivers like Andre Johnson or Larry Fitzgerald, though both of those guys are a little bulkier than Alexander. He immediately becomes the Rams' longest receiver, and his ability to go up and get the ball over just about any cornerback is impressive. His hands are absolutely top notch, and he rarely lets a catch get away from him. (Of course, I've said that same thing about Brandon Gibson, and he seems to have developed a case of the dropsies. Maybe I'm the problem.)
click to enlarge 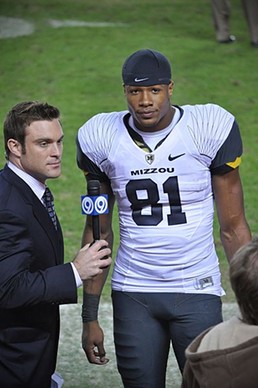 commons.wikimedia.org
​Alexander isn't exactly a burner, but his long strides enable him to eat up big chunks of real estate on the field and he's very quick off the line. After playing behind some other remarkably talented wide receivers early in his collegiate career (most notably Jeremy Maclin), Alexander stepped into the number one option role last season and had a monster year catching balls from the Tigers' Blaine Gabbert. The size is outstanding, the hands are great, and the production is certainly there. So what's not to like?
Well, since you asked, here's the not-so-good stuff. The biggest concern for Alexander has been, and probably always will be, durability. He likely would have been drafted somewhere in the 2nd-4th rounds of the draft this year, but at the time he was undergoing his fourth(!) knee surgery after injuring it in the Senior Bowl. His extensive injury history was just too worrisome for NFL teams, and he ended up an undrafted free agent. That could end up the Rams' gain, of course, since they managed to snag one of the higher-upside receivers in the entire draft without even using a pick on him, but there's a definite reason Alexander didn't go where his talent likely should have put him.
There are other concerns about Alexander, of course; his top-end speed is good but not great, and even in college he received demerits on his scouting reports for not running very crisp routes. He would round off routes and get creative instead, using his size advantage to catch balls over coverage. That won't work as well in the pro game, so Alexander will likely need to improve his discipline and sharpen up his cuts. Still, these are all relatively minor concerns; the knees, unfortunately, are not minor.
On the whole, Alexander has all the tools to be a very productive receiver in the NFL, and if he can stay on the field the Rams may very well have gotten themselves a tremendous bargain. The mere fact they gave him a four-year contract coming straight off the practice squad is pretty unusual in and of itself, and should indicate some measure of the team's opinion of him. How much of an impact he'll be able to make immediately is unclear, given that he's played mostly the opposition's offense in practice so far, but down the road his upside is undeniable. He has the size and strength of a true possession receiver, but with enough vertical speed to get behind the coverage and go for the big play.
So welcome to St. Louis, Danario. We're all counting on you. Just watch those knees, okay?