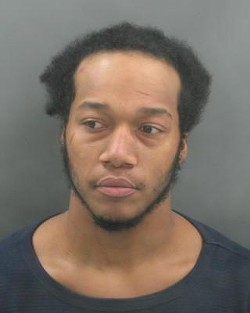 Darnell Clemons had warrant for prior rape in Maplewood.
A St. Louis man wanted for a prior rape charge is in custody today after allegedly forcing a woman off a St. Louis bus last week and sexually assaulting her.

The incident occurred November 11 and lasted into the next day, according to probable cause statement made public yesterday. The document states that Darnell Anthony Clemons, 23, boarded a bus last Tuesday and began conversation with a female passenger.

As the bus approached the 5300 block of Kingshighway in St. Louis, Clemons allegedly forced the woman off at gunpoint. He then took her phone and removed the battery, according to authorities, and led her to his residence in the 5300 block of Kingshighway. There he allegedly ordered her to remove her clothing and raped her. After he was finished, authorities say he again threatened the victim, telling her not to report what happened to police.

Police say video surveillance on the bus shows Clemons sitting next to the victim and holding what appears to be a gun. According to the probable cause statement, Clemons was also wanted for a charge of forcible rape in Maplewood and domestic assault in St. Louis. He's currently on parole for a burglary charge and is now being held on a $250,000 bond.