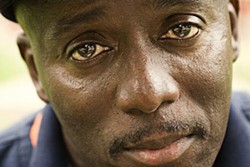 In 2008, Cole County Judge Richard Callahan (now the U.S. Attorney for Eastern Missouri) released Burton from prison, agreeing with the inmate that his constitutional rights were violated during a trial in which evidence suggesting his innocence was kept from the jury.

Last September, Burton was the subject of a Riverfront Times' profile, "Miracle Man" in which he's quoted saying: "I forgave St. Louis. I just don't trust it."

Well, maybe scratch the opening part of that statement. Burton, 48, has now filed a lawsuit against the St. Louis, the St. Louis Board of Police Commissioners (including Mayor Francis Slay) and several police officers who he believes framed him for murder.

The suit, filed August 18 in federal court in St. Louis, alleges that the police suppressed eyewitness descriptions of the murderer, coached witnesses into accusing Burton and created false police reports.

As a result, Burton was found guilty and sentenced to life in prison for the 1984 slaying of Donald Bell -- a man gunned down at a gas station at Delmar and Goodfellow. Burton states in the lawsuit that the actual murderer was a man named Jesse Watson, who had previously shot Bell but failed to kill him and who had vowed to finish the job. Watson himself was murdered in 1986.

A longtime acquaintance of PLAINTIFF named Samuel Coleman was present at the gas station at the time of the shooting. He was interviewed by DEFENDANT WILDER, and informed WILDER that he knew PLAINTIFF and that the man he saw at the gas station was much lighter than PLAINTIFF. Defendant WILDER covered up this information and Defendant HOBBS prepared a false police report that misstated Coleman's account.
....
During the trial, one or more of the INDIVIDUAL DEFENDANTS prepared eyewitness Joan Williams to testify, by showing her a picture of PLAINTIFF and telling her that he was
the defendant. Upon seeing the picture, Williams responded that the shooter had a much lighter complexion than the man in the picture and stated "you have the wrong man." Defendants suppressed her statements and PLAINTIFF never learned this information.

The suit alleges that other witnesses were also coached by police who wrote false police reports to back up the claims. Burton furthers that the police board had a hand in his wrongful imprisonment as it was "deliberately indifferent to and condoned the existence of a widespread practice and custom within the SLPD of improper witness identification procedures and of suppressing exculpatory and impeachment information from prosecutors."

A spokewoman with the police department tells Daily RFT that the department and police board is aware of the lawsuit but cannot comment on ongoing litigation.

Burton's Kansas City-based attorney, Brian McCallister tells Daily RFT that his client has forgiven St. Louis. "But does that mean he's not going to hold accountable those who framed him for murder and had him spend 24-and-a-half years of his life in prison?" asks McCallister.

Burton is seeking "actual and punitive" damages, though no specific monetary amount is named in the suit. In 2008 McCallister and Chicago-based attorney Mike Kanovitz (also representing Burton) won $16 million for a man who sued the western Missouri town of Lee Summit after being maliciously prosecuted for molesting a child. "And that man spent just five years in prison," says McCallister suggesting that Burton could be in for a much larger award.

After being released from prison in '08, Burton stayed two nights in St. Louis before moving to Kansas City. He now works part time for Catholic Charities, runs a lawn-care company and travels the country giving talks about his wrongful conviction and the decades he spent fighting for his freedom.