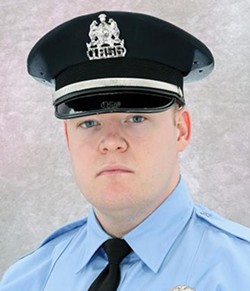 David Haynes was 27 and a one-year veteran of the department. Four other people were also injured in the accident. The burglary suspect Haynes was chasing remains on the lam.

The following per the St. Louis police:

The victim tried to follow the suspect, but the suspect sped off too quickly and the victim lost sight of him. The victim was able to describe the suspect (a black male with two gold teeth who was wearing a dark colored shirt) and the suspect's vehicle (a dark colored Hyundai Sonata.) A description of the vehicle and suspect were broadcast.

The patrol car spun out, causing the patrol car's driver side to crash into the front of a second SUV. The force of the impact pushed the second SUV into a small passenger sedan that was behind the SUV in traffic. The officer was trapped in his patrol vehicle for a short time but once he was able to be removed, he was rushed to Barnes Hospital where he was pronounced dead.

Four people, in the other three involved vehicles were injured, but their injuries are believed to be non-life threatening. The suspect's vehicle has since been recovered. The recovery location is not being released at this time. Evidence Technicians will be examining the vehicle for evidence. No suspect has been located. Haynes graduated from the St. Louis Police Academy in January of 2009. Prior to joining the Department he was a United States Marine.

He recently received a Chief's Letter of Commendation for his actions following a June of 2009 bank robbery. In that incident, Haynes and a fellow officer were able to locate the suspect based on the description given by witnesses. The suspect ran on foot but Haynes and another officer ultimately caught him. Haynes, who was recently married, leaves behind his wife, his mother and many other family and friends.