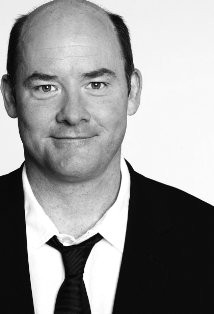 Image via IMDB
Did you know this guy grew up in Missouri?
We've seen this guy David Koechner all over the place: Anchorman (as Champ Kind, the sportscaster whose tagline was "WHAMMY!"), The Office (in which he played Michael Scott's buffoon friend, Todd Packer), Saturday Night Live, etc.

But at least we here at Daily RFT were gobsmacked to learn that this guy hails from central Missouri, went to Mizzou, was once charged with felony cocaine possession in Columbia (it was a crap charge), and for a time, considered running for political office in the Show-Me State.

We learned it all from comedian Marc Maron's podcast, WTF. The Koechner episode was uploaded last Thursday, and contains his memories of what it was like growing up in the small town of Tipton (between Kansas City and the capital):

I always knew I was different. You don't want to say 'black sheep,' but I knew I had to get out of town. I knew there was something else going on. I knew I had a different desire.

When you're from a small town, there's not a culture that says, 'You can do anything you want to succeed. If anything, it's, 'Hey, don't get too big for your britches. If you leave, in a way, that shows me being less successful just by virtue of staying.' And it's like, 'No, it doesn't.'

First, he had to make it through grade school:

When I was in sixth grade we went to the local meatpacking plant. We watched a cow being slaughtered from its entry into the squeeze shoot, it being shot, pulled up, throat slit and the whole process of that cow run through the entire slaughterhouse. I was in sixth grade, so this would've been in the 70s....We were all laughing and giggling and punching each other. And just going like, 'Ha ha! So what? We're out of class today.' Because everyone in that class had a farm....No one cried. No one batted an eye. Because everyone had seen an animal be killed. Because they were all farmers.