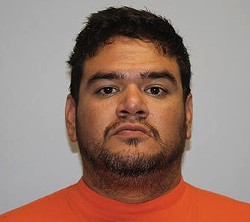 David Mangum, a 37-year-old Dexter man, tested positive for HIV in 2003 -- and since then has knowingly exposed more than 300 sexual partners to the disease without ever disclosing his status. That is the case according to the Dexter Police Department and the Stoddard County Prosecuting Attorney's Office, which alleges that Mangum admitted to exposing hundreds of partners, telling police that he kept his HIV status a secret because he did not want to be rejected.

"Our primary concern in putting out information about this case is a public-health concern," Russell Oliver, Stoddard county prosecuting attorney, tells Daily RFT. "We want folks that may have been exposed to know the dangers they may have encountered."

The allegations came to light this summer when a 28-year-old male victim filed a complaint against Mangum, a former partner who gave him HIV, a probable-cause statement says. The two had apparently met on Craigslist -- where Mangum may have met many more sexual partners over the years.

The charges -- full document on view below -- say that the victim told police he tested positive for HIV in July. He had met Mangum in October of last year through a Craigslist ad.

The victim was adamant that he had questioned Mangum prior to intercourse and "specifically asked if he had any diseases," cops say. "Mangum replied, 'No.'"

The two did not use protection.

On November 9, the victim moved in with Mangum in Dexter, a small southeast Missouri town. They apparently had an on-and-off relationship for several more months, but the victim told police he ended it in June "because he discovered Mangum was cheating on him."

After the breakup, the victim got a call from Mangum's former roommate, a woman who told the victim that Mangum had disclosed his HIV status to her in 2011. The victim went back to Mangum who reportedly admitted that he had tested positive to HIV in Texas in 2003. And he admitted that he has had more than 300 sexual partners since that test, the charges say.

Between October 2012 and July 2013, the victim estimated that he and Mangum had sex between fifteen and twenty times and never used protection.

On multiple occasions, there was a third man involved.

Mangum agreed to interview at the Dexter Police Department last week and waived his Miranda Rights.

He again confessed to knowingly exposing over 300 people to HIV since his 2003 positive test, cops say. He estimated he has had more than 50 to 60 sexual partners from Stoddard County. He also admitted that he "never disclosed he had HIV" to them, the charges say.

Why? From a cop's statement in the charges: "I inquired why Mangum did not disclose he was HIV positive to his sexual partners, and he replied, 'Fear of rejection.'"

He has been charged with reckless exposure to HIV. He is being held on a $250,000 cash bond and has an arraignment scheduled for today. Knowingly exposing someone to HIV without their consent can lead to fifteen years in prison -- and actually infecting a partner can result in a more serious sentence.

Oliver tells us that individuals in Stoddard county who have used the Craigslist men-seeking-men section should be aware of these charges.

"From my understanding that is primarily how he had his encounters," he says, adding, "This goes beyond that immediate group."

Of the 300 individuals, "Each could have partners of their own and those partners need to be informed."

"We'd like to have an accurate view of the scope of the damage that this individual may have caused," he says.

His office would be interested in hearing from any potential victims, even if they want to remain anonymous.

Mangum does not have an attorney listed in court records.