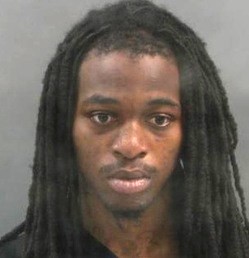 The St. Louis Metropolitan Police Department has made an arrest in connection to one of the many eruptions of violence late Monday night when eighteen people were injured across the city in eight separate incidents.

Davonta Coleman, 21, was responsible for six of those injuries, police say. Coleman, who lives on Margaretta Avenue in the Penrose neighborhood, was charged yesterday afternoon with six counts of armed criminal action and one count of shooting from a motor vehicle.

Police say this particular shooting was part of "an ongoing dispute between two families."

Police have said that none of the incidents on Monday were random acts of violence.

The probable-cause statement, on view below, doesn't have a ton of details, but it says that many of the victims are related and were gathered in the front yard of a relative's apartment building when the shooting happened on the 4700 block of Highland Avenue in the Kingsway East neighborhood at around 10:30 p.m. (That night, there were five other unrelated shootings and one stabbing incident.)

Coleman, police say, shot a handgun into a crowd of people and hit six of them:

The car eventually sped away, and the victims were all taken to a hospital where they were listed in serious condition.

The department praised its officers for making a quick arrest in this shooting.

The CAO issued charges on the suspect responsible for shooting 6 victims in the 4700 block of Highland on 6/10. Great work officers!

Here's the full police summary followed by the probable cause statement.