A St. Louis County jury found Ferguson guilty of killing his son and impregnating a minor

VIA ST. LOUIS COUNTY PROSECUTING ATTORNEY
In 2003, Dawan Ferguson's severely disabled son vanished. He claimed the boy was kidnapped. Despite inconsistencies in his story, Ferguson wasn't brought to justice, until now.

On the morning of June 11, 2003, 30-year-old Dawan Ferguson called 911. In a conversation that lasted less than 30 seconds, he calmly told the dispatcher his severely disabled nine-year-old son had been in the backseat of his SUV when it was carjacked just moments ago from the corner of Page Boulevard and North Skinker Parkway in the north-county neighborhood of Wellston.

When police arrived, Ferguson told them his son, Christian, had a rare condition that required life-saving medication be administered multiple times a day. Christian had been throwing up all last night. That morning, when Ferguson tried to wake Christian, he'd found the boy unresponsive. As Ferguson rushed his son from his home in Pine Lawn to St. Louis Children's Hospital, he stopped at the pay phone to call ahead to the hospital to let the staff know they were on their way. He said when he looked back from the pay phone to his car, it was gone. Vanished.

Frederic Wolf, at the time a 15-year veteran of the St. Louis Metropolitan Police Department, was one of the first officers to respond when Ferguson's call came in. He directed the initial search for Christian, whom police believed to be in the back of a car that was most likely being taken for a joy ride.

"Time was of the essence," Wolf later testified. "The latest information we had was that the vehicle was headed east on Page. I wanted officers to start [searching] the two to three blocks immediately to the east headed toward the city."

Police cars from other districts and even other police departments joined in the search.

"We were tearing everything apart trying to find this [SUV]," Wolf said.

When Christian's mother, Theda Person, heard that her son had been taken, she suffered a breakdown. Her husband at the time (she and Ferguson were divorced) took her to DePaul Hospital.

"I remember crawling on the floor at the hospital," she tells the RFT. "I didn't know what else to do."

On one of the televisions in the hospital, she saw a news anchor reporting live about Christian's disappearance.

She knew immediately that her son hadn't been in the back of the carjacked SUV.

JENNIFER SILVERBERG
The pay phone where Christian Ferguson reported his car had been stolen.

In just two hours, police found Ferguson's SUV parked in a residential neighborhood about five miles away (to the west) from where Ferguson made the initial 911 call. When police found the car, they expected Christian to be in the back seat. But the nine-year-old was nowhere to be found.

Police requested that Ferguson accompany detectives to the police station downtown "due to the suspicious nature of the case," according to a police report.

When they asked him to take a polygraph, Ferguson declined, "adding that he did not wish to make any further statements and wished only to speak with an attorney."

Police asked Ferguson's then-wife, Monica, if she or Ferguson knew anyone who lived near where the SUV was recovered.

They did: Lakisha Mayes.

When police went to interview Mayes at her Ferguson home, her car wasn't in the driveway. She told investigators that for a short while she had lived with Ferguson and been involved in a menage-a-trois with him and his wife. The living situation had fallen apart, but Ferguson still had keys to Mayes' Chevrolet Malibu. Police asked her where the Malibu was and Mayes said that she assumed either Ferguson or Monica had taken it to look for Christian.

Later in the day, Mayes spoke on the phone with Ferguson and he acknowledged he had borrowed the car without asking.

Mayes later testified that she asked how Ferguson had been able to get to her car if his SUV had been stolen many miles away. 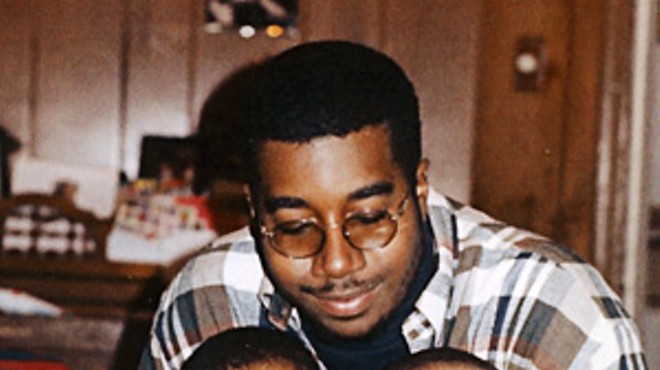 Vanishing Act, Part 2: Missing since 2003, little Christian Ferguson is almost surely dead. Police think they've fingered the culprit — and there's nothing they can do about it. A Riverfront Times Special Report.

Ferguson's reply was ominous: "He said he didn't want to involve anyone else," Mayes recalled. Then "he told me that I didn't have to talk to [police]."

News of an abducted, severely disabled child spread fast throughout St. Louis. By 8 a.m., Fox 2 was at Page and Skinker reporting live about the incident. Later on, when investigators took a closer look at the news footage, they saw the very Malibu Ferguson had borrowed parked at the intersection.

Ferguson said he borrowed it to look for Christian after he left the police station. But what was it doing already parked at the intersection where the whole bizarre kidnapping saga began?

Meanwhile, law enforcement and volunteers scoured north county and beyond for Christian, who couldn't survive for more than a day or two without his medication. Civilian search groups were quickly organized. People waded into drainage ditches and underbrush. They searched vacant buildings. Others distributed fliers. Search coordinators made maps of north county with already-searched areas shaded in.

"I'm expecting a miracle," Person told the Associated Press the Monday after her son's disappearance. "Please bring my angel Christian back to us."

Christian's disappearance remained a blot on the city's conscience. The public was befuddled by the lack of charges brought against his father, who seemed so clearly guilty. He'd gotten away with killing his own son, and for nearly two decades it appeared as though he always would. Then suddenly, seemingly out of the blue, Dawan Ferguson found himself on trial, and his depravity was shown to be greater than anyone in the public would have ever guessed.