Dear Schnucks: By the Each Is Not a Thing

People are always quick to jump on the "three times and it's officially a trend" bandwagon. Especially if those people are media people, and they need to crank out a story on a slow news day.

But sometimes it only takes twice until we say enough is enough. This is one of those times.

A couple years back we spotted the bananas pictured above in Target.

Which of course is ludicrous. But we let it go: Target is a company that's based in Minneapolis, and when compared to some of the Upper Midwest's language idiosyncrasies ("So, ahhhh, can you borrow me a jacket, dere?"), "by the each" seemed innocuous, if cringe-worthy. After all, Missourians have been led to believe the greatest threat from other states are rifle-toting armadillos slowly making their way up Interstate 44.

But then these signs started to take over the butcher cases at the Friendliest Stores in Town.

This is not OK.

Schnucks, we love you. You make us feel like Debbie Reynolds to your Gene Kelly every time we're serenaded by "Singin' in the Rain" in the produce section. When your giant shopping cart rolls down Market Street during so many holiday parades, honest to God, tears of hometown pride stream down our face. Your "recipe preparation station" is called Schnucks Cooks, which is delightful. You put Ping-Pong balls right there in the damn craft-beer section for our convenience.

But we're begging you, oh mighty local tastemaker: Please don't make "By the Each" a thing. Because it's not.

Rather than "Sold By the Each," why not "Each Sold Individually"? Or "Apiece"? Or just "Each"?

If some knuckleheads are so confused that they can't figure out that the (clearly marked!) six-ounce burgers are sold by one by one -- not by hectare, fortnight or Smoots -- they shouldn't be trusted with a shopping cart, let alone making mealtime decisions. (These may well be the people confounded by express lanes...hmm.)

We know that you know how to do it the right way. Like here, in Produce. Though we do concede that, in this case, "By the Peach" would in fact work beautifully. 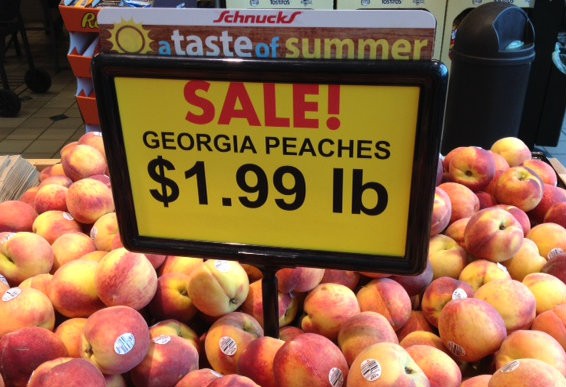