Deja-Vu All Over Again: Berra Takes Another Tumble 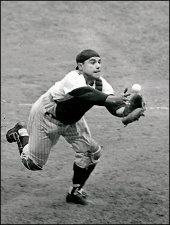 St. Louis son Yogi Berra briefly checked into a Florida hospital yesterday after taking a backward fall in the visitor's clubhouse at the Philadelphia Phillies spring training complex, according to a New York Times report. But the legend is fine.

The 85-year-old Berra stumbled after his sneaker caught in the carpet of the clubhouse, according to the report. It's the second tumble in the past year for the Hall of Fame catcher, who has a park named after him in the Hill neighborhood.

After paramedics rushed Berra to the Morton Plant Hospital after his morning fall, he remained there until he was released a few hours later.

According to the report, Berra was in no mood to be taken to the hospital, though he kept up his humor with the paramedics during the trip. If there were any forks in the road on the way over, we can only presume they were taken.