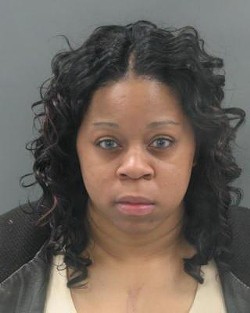 Delicia Simpson
Update 3:15 p.m. St. Louis prosecutors this afternoon charged Delicia Simpson, of the 3500 block of Giles, with first-degree murder. Police report that Simpson and the victim were "in a relationship."

A 39-year-old man was stabbed to death this morning near Gravois and Grand in south St. Louis.

St. Louis police report that the victim, Derrick Wright, was stabbed in the chest around 2:40 a.m. at his home in the 3500 block of Giles and later pronounced dead at an area hospital. A female inside his residence has arrested and taken into custody. Police won't say what relation -- if any -- the suspect had with Wright. She's described only as 27-year-old black female.

More information if/when it become available. Wright's murder is the second homicide in the 3500 block of Giles in the past five months.