"Did You Know All Women Are Easy?" Why, No. Please Enlighten Us. 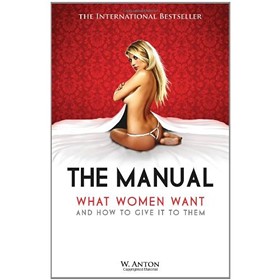 When wearing just a thong to bed in February, most women would also prefer a blanket, or at the very least another warm body.

Daily RFT received this missive a few days ago, but we held onto it so the information it contains will be fresh in your mind when you head out to the Friday night meat markets. And hoo boy was it hard to wait!

Here are few facts all men in the 'men-seeking-women' crowd should know: World class Lothario and author W. Anton explains in steamy detail -- and without apology -- his conclusion that all women are easy, why they're easy and how a man can take advantage of it in his new book, The Manual: What Women Want and How to Give It to Them.

It's so great when some dude takes it upon himself to explain "all women." He must have such a brilliant, subtle mind! (For more on whether our media-whoring Lothario has a clue what he's talking about, please continue past the jump.)

Herewith the full pitch, complete with our footnoted commentary:

Beautiful Women Want to Spend the Night With You!

FINALLY - A REGULAR GUY'S GUIDE TO GETTING THE GIRL!

W. Anton is every guy's worst nightmare. He's not a rock star nor is he particularly wealthy. His looks wouldn't land him on the cover of Men's Vogue* or Sports Illustrated**. But if he walks into a club in LA or anywhere else for that matter, chances are he'll leave with the most beautiful woman in the room.***

He has a secret weapon that every successful lady's man knows. Here's a hint; it has nothing to do with size. Not the size of your hedge fund, your pickup truck tires or your...well, you know.

"It really boils down to fear and how we deal with it," Anton says. In his new book, The Manual: What Women Want and How to Give It to Them, Anton examines the root causes of male insecurity and how best to overcome -- or avoid -- them in the pursuit of beautiful women.

"Most men set up self-imposed barriers and dwell within tiny comfort zones that absolutely limit their ability to talk to women," he says. "What comes out is either false bravado or self-deprecating insecurity. Neither works. Never did. Never will. Not at least for the man who wants to spend the night with the most beautiful woman in the room."

In a very provocative interview, Anton will discuss:

"My approach to seduction is simple," he says. "I teach men how to give women what they want**** -- what they have always wanted, and in turn guys get what they want -- sex."

When he's not meeting beautiful women, W. Anton is an expert in online games' production processes. He is currently on assignment in Asia. While not married, Anton says he hasn't been single for several years. To learn more, visit him at www.W-Anton.com. The Manual: What Women Want and How to Give It to Them is available at Amazon.com.

* Men's Vogue hasn't been published since 2008. ** Silly W.! Everybody knows guys who appear on the cover of Sports Illustrated are cursed. *** Interesting assumption that every beautiful woman in the room actually wants to go home with a man. **** Another interesting assumption is that all women would want the same thing from a man. Can this be? In an impromptu poll, we asked four female Riverfront Times staffers (the closest research subjects at hand, but also a fairly homogeneous group in terms of age, education, profession, sexual preference, marital status and socioeconomic level) what they wanted from a man. Even within this small sample, results varied widely. For example, one staffer prefers oral sex while another likes "dick," a third offers no preference, stipulating only that the sex occur twice a day, and a fourth wants to be showered with candy until she becomes borderline diabetic, whereupon "he can replace the candy with naughty activities."

One woman requires "an occasional round of drinks" and a ride home when she's drunk. Another requests "a really, really gigantic appetite that requires my constant attention/excellent skillz in the kitchen. an ability to do all the things i don't want to do: math, taxes, sending thank you cards, buying cat food. but he won't like mowing the lawn, because that's my thing." A third wants a man who will build her a darkroom in which Marvin Gaye will always be playing while she develops photos.

One research subject demands "blind obedience," another "constructive criticism." One wants from a man "utter contempt for sports (apart from tennis and maybe soccer)" while another requires "football on Sundays, baseball throughout the week (when in season)."

Of all the answers in this poll, there was only one overlap. One subject said she wanted jewelry. So did another, only she was more specific: "a 4 ct. emerald cut diamond in a vintage platinum setting."

Gee, W. What could you possibly have that would satisfy us all?