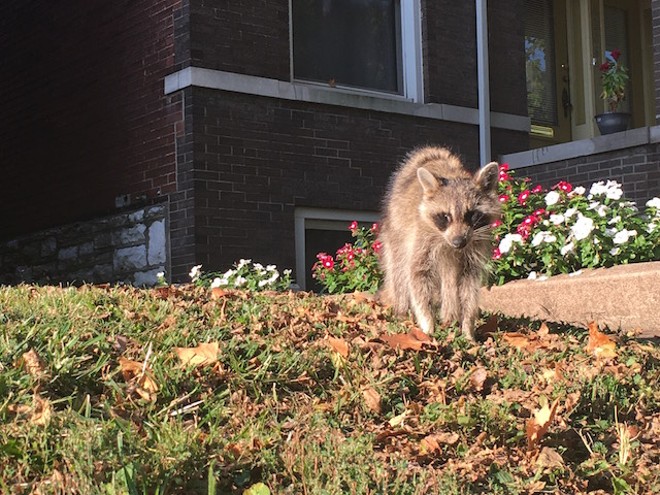 PHOTO BY ROBERT LANGELLIER
Veterinarian Jay King recently euthanized this raccoon, who was sick with distemper.
Vaccinate your dogs, folks. Distemper sightings in raccoons are up in south city.

Distemper is a painful, incurable, saliva-borne disease similar to rabies, wherein an infected raccoon's body and brain slowly degenerate over the course of weeks or months. In its final stage, the zombie-like animal wanders around drunkenly, unaware of its surroundings and unafraid of animals, cars, car horns, thrown rocks, or humans approaching them with food, or — as King has witnessed — the desire to pet them. They have runny noses and mucus-y eyes and sometimes cough, sneeze, vomit or emit diarrhea.

King's husband Jay, a veterinarian, has been euthanizing them voluntarily.

"He doesn't want to be Dr. Death," Teya says. "And half the time I'm (going out) in my pajamas. But the disease is terrible. Who would want them to suffer like that?"


A wildlife rescue volunteer and a vet scoop up a distempered raccoon :( pic.twitter.com/5WOf5QZlV1


Social media on both Facebook and Next Door have blown up with distempered raccoon sightings lately. Unvaccinated dogs and cats are susceptible, and the disease is fatal 50 percent of the time.

So what do you do if you spot a raccoon stumbling around in broad daylight? Easy. Call the police nonemergency line. They will shoo it off the street or direct you to Animal Control, which lists nothing in its budget for veterinary care as of last year. Animal Control, which is partly run by Stray Rescue, which was closed down for three months last year due to a distemper outbreak that killed 43 of its dogs, will likely not respond, many neighbors have alleged. Or its emergency number will direct you to the police, who will send you to the Health Department's voicemail. If you call the Citizens' Service Bureau, they might send you back to the police nonemergency line, whose on-duty supervisor will promise to contact Animal Regulations, whose phone number is the same as Animal Control's. Then it's simply a matter of calling the Humane Society, who will direct you back to Animal Control, who, they will tell you, can't come out without a police escort, and not at all right now due to the "riots" (their word) in the city. 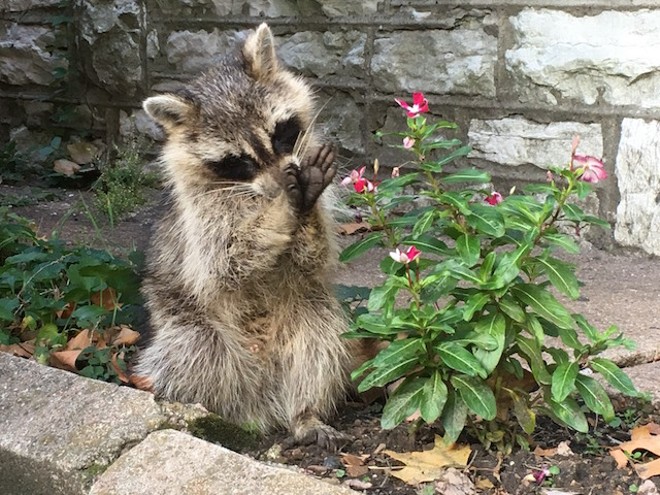