Does K2 Synthetic Weed Really Get You High? 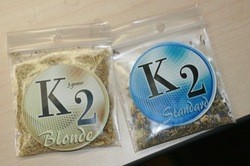 Image via The Pitch
K2: it's just like pot, only not.
If you believe the hype, the synthetic marijuana product K2 is the most potent pot available this side of Amsterdam.

Both the Post-Dispatch and Daily RFT's own Chad Garrison reported this morning on Missouri lawmakers following Kansas' lead and attempting to ban the imitation reefer that bills itself as "herbal incense."

While we wrote that "users [say] it gets you stoned to the bejesus, just like regular marijuana," the local daily took the claims of a few politicians and police officials at face value and upped the ante almost to the point of full fledged fear mongering.

They wrote that it contains compounds that "are at least three times more potent than THC" and produces a "high equal to marijuana." They also quoted a state rep from Springfield -- the one who wants to outlaw the stuff -- as saying "somebody's going to be using this, driving a vehicle and killing somebody." And to frighten the parents out there, they found a sheriff who said he recently found "a discarded K2 wrapper" in the parking lot of a local high school.

So now the obvious question: does this shit actually work or is it just for high school burnouts who can't get their hands on the real McCoy?

The P-D quoted one pharmacist as saying "nobody knows what this K2 stuff does."

Actually, that couldn't be further from the truth. The RFT's comrades in Kansas City at our sister paper The Pitch recently performed an invaluable public service: they smoked two whole bags of K2 (both the low-priced "Standard" variety and higher grade "Blonde" type) and chronicled the experience on their news blog.

The verdict? K2 gets you nice and buzzed...for about 30 minutes. And, obviously, it's not nearly as effective as actual mary jane.

A few highlights of their Pulitzer-caliber reporting:


I didn't feel any of the paranoia I used to associate with marijuana. There's also a very steep drop once the chemicals have done their job. You look up and you're dead sober; this is unlike weed, which always left me lethargic and stupid for an hour or two after smoking. This is the kind of thing you could do on your lunch break and be back to work on time and clear-eyed.

From "a regular pot smoker":


I would use K2 if I only had access to low-grade marijuana. For a small amount of money more, one could buy some decent nuggets.

And a "moderate" user:


It smelled like herbal, nonclove cigarettes and made my lips tingle slightly. When the high set in, the world seemed to tick a bit slower, and, shit, if everything wasn't funny as hell ... for like five minutes.

The bottom line? Missouri's legislators probably have better things to do with their time than pass laws outlawing the trendy fake-schwag that's supposedly flying off the shelves of local head shops. The P-D at least mentioned this perspective, even if it took them until the last lines of their story to get around to it:


Dan Allder, 27, of St. Charles, began smoking K2 a month ago after hearing about it from friends. But he's not surprised police and lawmakers want it off the streets.

"It's just an alternative to weed is the way I look at it," Allder said. "It would be nice if the government could just keep their fingers out of it."