Dojo Pizza Tells Investigators to Put Up or Shut Up 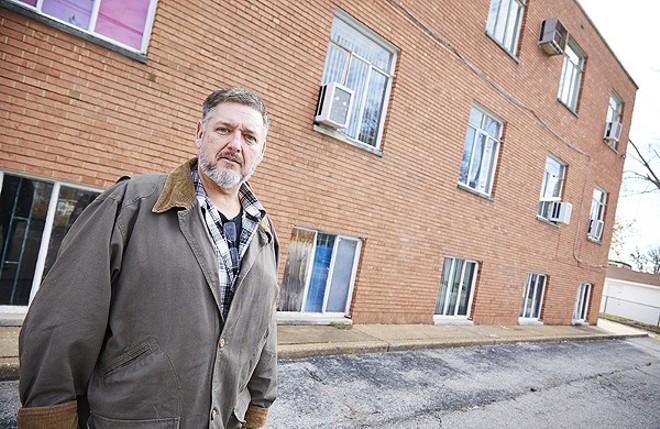 Steve Truesdell
Dojo Pizza owner Loren Copp says investigators have had long enough to file charges if they had a case.

Months after investigators raided Dojo Pizza under the glare of TV news cameras, removed the girls living there and ruined the name of owner Loren Copp, it’s time for them to file a case or clear him, his lawyer says.

“It’s been four months,” attorney Justin Meehan says. “If they’ve got something, bring it.”

New documents obtained by the Riverfront Times show that state social service workers have abandoned a number of the most serious allegations against Copp, but the possibility of St. Louis or federal prosecutors filing criminal charges continues to dog the 47-year-old sensei.

A human trafficking investigation brought city detectives and FBI agents to Copp’s door in October — a fact that quickly leaked out to reporters and was later confirmed by an affidavit police filed in support of a search warrant. A city building inspector who accompanied law enforcement condemned the Bevo Mill church-turned-pizzeria, and social service workers removed four juveniles who lived on site under Copp’s care.

The building remains shut down as Copp tries to marshal support for a return.

“I’ll be back if Bevo wants me back,” he said Sunday night at a community meeting stocked with about 30 supporters.

Copp was the subject of an RFT cover story in December. He had lived in the building at the corner of Morgan Ford Road and Neosho Street with four girls, whose parents left them with him as they battled drug addiction and/or poverty. He raised two of the girls for nine years and considers them his daughters — an admittedly unorthodox, but wholesome relationship, Copp insists.

Doyle Murphy
Loren Copp says he wants to reopen Dojo Pizza in the Bevo Mill neighborhood.
His “daughters” are now in foster homes — even though a Missouri Department of Social Services Children's Division investigation into accusations of abuse and neglect found there wasn’t enough evidence to support a number of the allegations, including that Copp touched the girls inappropriately.

But the division’s investigators didn’t dismiss all the claims. The findings, contained in a February 10 letter obtained by the RFT, say Copp fed the girls inconsistently, sheltered them in filthy conditions and ordered them to work in the pizza restaurant.

The most nefarious of the remaining accusations is an allegation of sexual abuse. Investigators claim he had a 17-year-old remove her shirt and bra while he performed acupuncture — written in the findings as “acute punctured" — on her back. Copp previously confirmed performing acupuncture on the teen, but denies she removed her shirt and bra.

As for any idea of neglect, he points to pictures of the girls smiling on social media as proof they were happy, well-fed kids.

The 17-year-old previously told the RFT she and the others worked at the pizza shop for tips, but that Copp never forced them to do so or abused them in any way.

Copp and Meehan claim the girls were barred from testifying in family court hearings and say the teens deny statements being attributed to them by investigators. A previous social services inquiry in 2014 found the girls were safe.

And even if the division's recent allegations are true, Meehan says, they’re still a long way from the human trafficking accusations leveled by law enforcement and left to hang like a dark cloud over Copp's life.

City police and federal agents created a “media circus,” and now they should give him his day in court or issue a statement wiping away the suspicions, Copp and Meehan say.

“They say the feds can indict a ham sandwich,” Meehan says. “This is a baloney sandwich.”