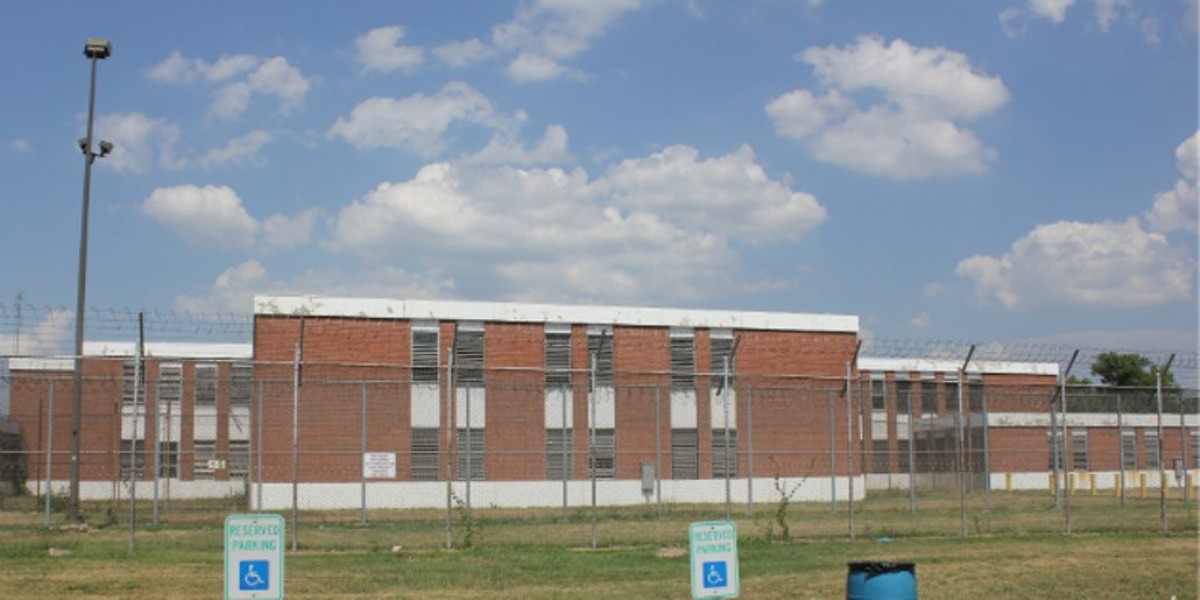 Defendants confined to the city's Workhouse wait an average of 291 days for their day in court. DOYLE MURPHY

It was a tragedy made to order for a provocative news story.

Marcia Johnson, 54, of St. Louis was found brutally murdered in her south city home, and the suspect — her husband, Samuel Lee Scott — had apparently come straight from jail to commit the crime after making bail. Scott had been held by the city for four days after being picked up on a "wanted" warrant alleging he'd punched Johnson in the face three months earlier. He had been charged with fourth-degree domestic assault, a misdemeanor.

What made this story uniquely newsworthy: Scott had been bailed out by a national social-justice group known as the Bail Project, whose mission is "to combat racial and economic disparities in the bail system." St. Louis is one of the group's prime target areas, and since arriving here in early 2018, it has provided bail for more 1,300 low-income defendants incarcerated while awaiting their day in court in both city and county.

You can't blame the media for jumping on the story: It is an interesting and unusual twist on a horrible tragedy, and that makes it news. It even received some coverage outside St. Louis.

But one important point needs to be stressed about this story: The Bail Project did nothing wrong, and the group absolutely should not be blamed for Johnson's death, not even indirectly.

Other local media, especially the Post-Dispatch, gave the Bail Project's role heavy emphasis. Yet the facts don't bear that attention out. The Bail Project didn't stage a jail break. It simply put up the bail set by the criminal-justice system. If a friend or relative of Scott had posted the bail, no one would be blaming that person for the ensuing tragedy, nor should they. Ditto for a bail bondsman.

There's only one party to blame for this horrific act, and that is Scott, assuming he is found guilty of murder. If that's the case, he should and will spend the rest of his days in a maximum-security prison for killing a "loving, kind-hearted mother" (in the words of a family member). Period, full stop.

And even if one chose (and some have) to play a pointless, Monday-morning-quarterback game of "what if Scott had not been bailed out of jail," that exercise should instead target the criminal justice system. Judges set bail. Defendants do not, nor does anyone who acts on behalf of a defendant.

If a scapegoat is needed, I suppose someone could unfairly chastise respected Judge Calea Stovall-Reid for setting bail at only $5,000, or blame the office of Circuit Attorney Kim Gardner for charging Scott in the initial case with the lowest of the four available classes of domestic-abuse crimes. I won't do that; the judge didn't possess a crystal ball and the January incident seemed to fit the fourth-degree domestic-assault category. They're blameless here, as was the Bail Project.

Still, that didn't stop the Post-Dispatch editorial board from essentially portraying the Bail Project as an accessory to murder:

"Editorial: Accused assailant exits jail, thanks to the Bail Project. Then a victim dies."

In an historic low point in knee-jerk liberalism, the editorial began by gently stating, "Under many circumstances, efforts like the Bail Project St. Louis would be praiseworthy for trying to level the playing field" for poor defendants.

But after paying homage to its quasi-concern over the injustices of the cash-bail system and city Workhouse conditions, the Post asked rhetorically, "But what happens when this well-meaning effort backfires as it did on April 9?"

Here's one answer: People sometimes lose their minds. People flail angrily at the sky with the judicial equivalent of killing the messenger who's delivered the bad news. Then they write words like the Post did: "Sorry, but cash bail systems, unfair as they can be, pale in comparison to the injustice of murder."

The Post's 20-20 hindsight was probably well-received in law-enforcement circles. Gardner, herself well-meaning, had already offered publicly to sit with the Bail Project and explain the need for it to take special caution in bailing out those charged with domestic abuse. A police source told me the Bail Project "needed to own" what happened with Scott.

Wrong. The Bail Project resembles an ATM more than a judge. The responsibility to protect society from defendants who might reasonably be considered a security threat, or a flight risk — the two considerations traditionally weighed in setting bail — lies with a judge, acting with input from prosecutors and police.

The people working at the Bail Project — they call themselves "bail disruptors" — possess neither the resources nor qualifications to supplant judges' judgment regarding bail. Even if they had the capability to do so, it's not their job.

Tellingly, when I ran this by another law enforcement source (who defended Stovall-Reid and Gardner, but not the Bail Project), they intimated that $5,000 bail for a Class A misdemeanor was essentially the judge's way of making certain that Scott would stay incarcerated, suggesting it indicated Scott was viewed by law enforcement as posing a greater danger than his relatively minor offense would have suggested.

"Wait a minute," I asked. "If the guy was that dangerous, why give him bail at all? Or why not have set it at $25,000" — the average in the city — "or even higher? Why wasn't there electronic monitoring?"

The answer: After considering Scott's inability to pay, the judge likely believed $5,000 all-cash bail was sufficient to keep him imprisoned. That's just how these things are handled in the city: It's a passive-aggressive bail system, designed to keep a defendant incarcerated until trial without appearing too draconian.

And so by showing up with that $5,000, the Bail Project inadvertently messed with the natural order of things in St. Louis. And what was the Bail's Project's sinister motive? Was it making a statement that requiring cash-bail is worse than murder? No, it was bailing out a guy charged with a misdemeanor that carries the same penalty as shoplifting. (Which, by the way, is something that needs to be revisited in Jefferson City.)

In a lawsuit ArchCity Defenders filed last year over the city Workhouse, Bail Project claims that in its first year in St. Louis, it got more than 1,300 low-income defendants released — and that those defendants notched a 94 percent success rate in making their court appearances. More than 53 percent of their cases, it says, were ultimately dismissed.

If those numbers are even close to being true, they cry out for the need to abolish the cash-bail system. It's outrageous enough — as ArchCity argues in that lawsuit — that the average defendant languishes 291 days in the hellish Workhouse waiting for trial. Now the Bail Project adds two giant logs to the fire: One, that these defendants would have shown up to their court dates even without this oppressive detention and, two, that most of them wouldn't be convicted when they did.

If a suspect such as Scott poses a risk to society, don't give him bail before trial. But thousands of others — here and across the nation — are having their civil liberties trampled because of their low-income status.

It is unacceptable that poor people are punished for being poor before even getting their day in court. And their plight is compounded by getting cut off from their families and jobs and lawyers during a time they're presumed to be innocent of a crime.

You want to get rid of those troublesome disruptors at the Bail Project? Here's a suggestion: Get rid of cash bail.