Don't Worry, Illinois Will Not Become A Gun-Crazed Dystopia 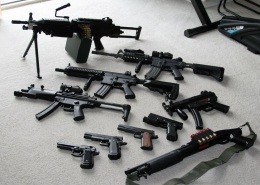 Image via
Guns guns guns! What will save Illinois?
Yesterday, the 7th U.S. Circuit Court of Appeals struck down the state of Illinois' ban against concealed-carry. (We've posted the decision online here.)

Illinois was the last state to have such a ban. If the Land of Lincoln doesn't appeal to keep it on the books, then lawmakers will have six months to craft a new gun law.

What will that new law look like? Will it turn Illinois from the last redoubt of gun-control into the wild west? No.

It's true that gun-rights advocates have won legal major victories (as they did yesterday) in establishing a citizen's Second Amendment right to own a gun for self-defense both at home and in public. But there are limits to that right imposed by states. Since 2007, the pro-gun camp has been attacking those limits. And for the most part, they've been losing.

At least that's the conclusion reached in a report released last month by the California-based Law Center to Prevent Gun Violence (a.k.a., the LCPGV -- not hard to figure out their ideological bent, based on the name, so weight what follows accordingly.)

According to the LCPGV, the key decision by the Supreme Court came in 2007 in District of Columbia v. Heller. In that case, the high court struck down the city's long-time blanket ban on possessing guns, thus once-and-for all confirming: You have a right, under the Constitution, to keep a gun in your domicile.

Since Heller, gun-rights advocates have been emboldened by this newly-clarified law of the land. Challenges to gun restrictions at the local, state and federal level have poured in. The LCPGV claims to have analyzed more than 600 decisions.

Most of these challenges have been raised in criminal cases. So what's happened there?

Well, at the federal level, courts have "almost uniformly rejected" criminal defendants' challenges on Second Amendment grounds to federal firearms laws, says the LCPGV. The laws that have survived include:


Then, at the state level, the LCPGV says that most courts that have heard challenges to state and local gun-control laws have upheld them. Laws that have survived include:


And all of this is just the criminal side. The LCPGV says that there are now eight "significant" civil suits pending against the federal government, and 50 against the states, for their gun laws. Quoth the report: "Generally, Second Amendment challenges by civil plaintiffs have been unsuccessful."

So yes, it's true that the pro-gun camp won a major victory yesterday in Illinois.

But if Illinois ends up crafting a new gun law with the same restrictions that are alive and well in other states, Second Amendment absolutists will have a lot to fight against. And experience elsewhere suggests that it won't go very far.