Three former aldermen caught in a bribery scheme, according to a federal indictment 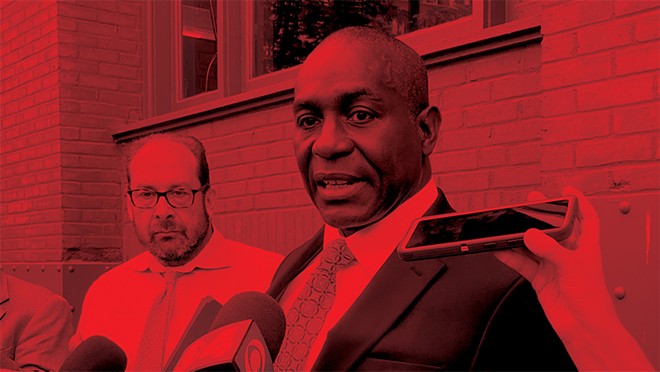 Monica Obradovic
Lewis Reed speaking to the press after an unsealed federal indictment implicated him in a bribery scheme.

The 66-page indictment is the result of a two-and-a-half-year federal investigation that involved clandestine recordings of dozens of meetings and telephone calls, as well as financial and other records. Now the case is in the hands of Assistant U.S. Attorney Hal Goldsmith, the same prosecutor who brought down former St. Louis County Executive Steve Stenger in 2019 for his pay-to-play scheme.

The three are accused of accepting thousands of dollars in cash from an unnamed businessman referred to as John Doe in the indictment. Collins-Muhammad also allegedly received an iPhone 11 and a 2016 Volkswagen. And Boyd allegedly requested and accepted free car repairs for his 2006 Chevrolet Impala and Kia van.

A subpoena issued by the FBI last month to the St. Louis Development Corporation for texts, voicemails, financial documents and other records at 5337 Von Phul Street and 4201R Geraldine Avenue sheds some light on that investigation. Both properties are owned by businessman Mohammed Almuttan.

Almuttan is almost certainly the John Doe who allegedly paid a total of $40,000 to the three men in cash and campaign donations. In exchange for his thousands in cash, the three aldermen used their positions of power to assist Almuttan's purchase of land on Geraldine Avenue in north city from the city's Land Reutilization Authority at a price well below its appraised value. They also helped him obtain a tax abatement on that Geraldine property as well as abatement for a planned construction project on Von Phul.

Now, Collins-Muhammad, Reed and Boyd each face two charges related to bribery. Collins-Muhammad has also been indicted for a third charge of honest services bribery/wire fraud. And Boyd faces a separate, two-count wire fraud indictment for a 2021 scheme in which he allegedly sought $22,000 from an insurance company for damage to vehicles that were not his.

The Riverfront Times combed through the indictments against Reed, Boyd and Collins-Muhammad to provide a timeline of prosecutors' claims against the men — discovering how willing these elected representatives allegedly were to sell out City Hall, and for how little.

Mohammed Almuttan and his Scooby Snax

In 2017, north-county businessman Mohammed Almuttan filed a lawsuit against the mayor of Country Club Hills, claiming that the city was denying him a business license for a proposed laundromat because his family is Palestinian and practicing Muslims. At that time, Almuttan was hoping to open a gas station and convenience store at 7501 West Florissant Avenue next door to his Mally Supermarket. He also owned an auto-body shop, a garage and other property in the area.

Later that same year, though, Almuttan was indicted along with more than two dozen other people in a conspiracy to traffic in contraband cigarettes. The conspiracy involved Almuttan and other defendants daily buying cigarettes from St. Louis-area Sam's Clubs, then transporting and selling them in states like Illinois and New Jersey. (They were able to make a profit due to how low the tax is on cigarettes in Missouri.)

In the years leading up to the indictments, defendants were stopped numerous times by law enforcement while transporting thousands of cartons of cigarettes. At one point, in November 2015, one of the codefendants was stopped in an SUV in Indiana carrying almost $250,000 in cash "with which he intended to purchase Missouri tax-stamped cigarettes from Mohammed Almuttan."

Though a lot of media coverage around Almuttan concerns the "cigarette scheme," he was also indicted for importing analog drugs from China. (Analog drugs are chemically similar to illegal drugs.) The drugs were then sent to a property referred to as "the farm" in rural Missouri. There, synthetic marijuana was packaged with names like Sexy Monkey, Scooby Snax, iBlown and Dr. Feelgood to be sold at gas stations and convenience stores around St. Louis. Some of those stores were owned by Almuttan.

However, in April of this year Almuttan pleaded guilty to one count of conspiracy to traffic in contraband cigarettes in exchange for money laundering and other trafficking and conspiracy charges being dropped. His sentencing is in July.

Federal authorities have not confirmed this, but it seems almost certain that those charges were dropped because Almuttan cooperated with this investigation as John Doe.

January 2020: "With your help it will be phenomenal" 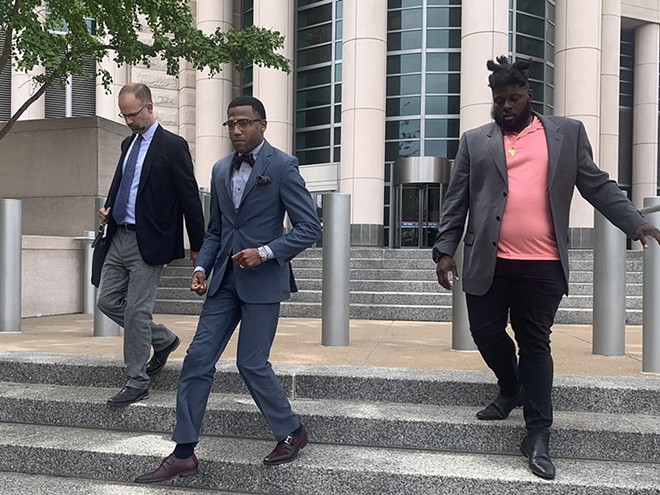 In January 2020, Almuttan hoped to build another gas station and convenience store like the ones he'd previously been accused of selling Scooby Snax out of when he reached out to John Collins-Muhammad.

Hartmann: St. Louis Is a Town Full of 'John Does': Bribery indictments are a spin-off of a warped political culture

Collins-Muhammad rose to political prominence in 2017 when, at 25, he became the youngest person ever elected to the Board of Aldermen. He filled the seat Antonio French left vacant when he ran for mayor. Collins-Muhammad ran into trouble almost immediately; a few months after his election, Florissant police arrested him for outstanding warrants for driving on a suspended license. After getting into a car accident in 2018, he was arrested again for the same warrants and the ones stemming from the 2017 incident .

He apparently did not resolve many of those warrants, because he was arrested again in 2019 on nine outstanding warrants for traffic violations.

"Not too bad. With your help it will be phenomenal."

Almuttan mentioned the gas station and convenience store he hoped to build on Von Phul Street in Collins-Muhammad's ward. "When you [build] the building like that," Almuttan said, "they'll hit you with $15,000 to $20,000 property tax. Really looking forward to get ..."

"I can do a 10-year abatement," Collins-Muhammad said.

Three days later, Collins-Muhammad provided Almuttan with an aldermanic letter of support for the project.

"What I owe you for this?" Almuttan asked, referring to the letter of support.

"I really appreciate it, my man."

"That's our job as an alderman — we're supposed to help out business owners."

Almuttan later gave Collins-Muhammad an additional $1,000 as the alderman continued to push the tax abatement for the property through city government.

Six months passed before they allegedly started working on a new scheme. Collins-Muhammad was trying to help Almuttan get government contracts for his trucking and hauling company, so the alderman had set up a meeting between Almuttan and an individual identified in the indictment only as Public Official One.

"Should I throw him something?" Almuttan asked.

"If you don't throw him something, he'll never come back."

The two men agreed that they'd split any money that came from government contracts secured through Public Official One's assistance.

Then Almuttan paid an additional $2,500 to the public official through Collins-Muhammad.

However, the towing contracts never materialized. The two $5,000 checks Almuttan cut the official were never cashed, and Collins-Muhammad kept the third payment of $2,500 for himself, using it to buy a 2008 Chevrolet Trailblazer.

Ryan Krull is a staff writer for the Riverfront Times.
More