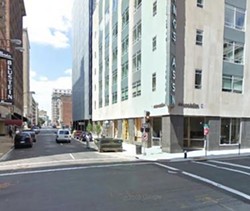 Site of the proposed bike center at 10th and Locust.
Too bad Riverfront Times' offices aren't downtown. I'm sure my colleagues would appreciate my sweaty, bike-commuting-self to take advantage of the new bike storage and shower facility soon to open in downtown St. Louis.

Announced this morning, the Downtown Bike Center will feature bike storage and a locker rooms for bicycling commuters. The center is expected to open later this fall at 1011 Locust Street. Bikers will be charged a small monthly fee for the service.

The project is being funded by a federal grant the city received from the Department of Energy. Loftworks LLC donated the space at the northwest corner of Locust and Tenth Street and the Partnership for Downtown St. Louis -- through its Downtown Community Improvement District -- will also provide funding.

"We are building a City that provides an attractive way of life. After World War II, the car was a symbol of freedom. For some people today, it is just the opposite," said Mayor Slay. "We look forward to working with the Downtown St. Louis and Loftworks to ensure the long-term success of this public bike center and the City's cycling initiative."