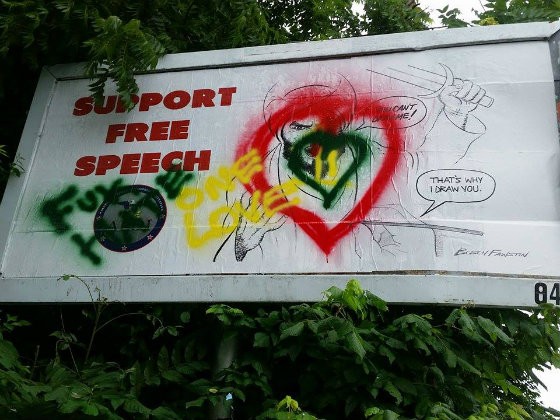 UPDATE: We updated this story at 7 a.m. on June 24. Scroll to the bottom of the latest.

Courtesy of AFDI
A closeup of the Muhammad billboard illustration.

The billboard was spotted by an RFT reader who gives his name only as Don L. The reader explains that he works in medical transport, so he spends a lot of time in the hardscrabble parts of the city -- and he doesn't appreciate the way the billboards seem to be clustered there.

"Nobody here asked for this," he says. "And it's not funny. Let's put these up in rich, white neighborhoods -- do you think they'll put up with that?"

Daniel "Boone" Fuller, CEO/owner of St. Louis-based Adunity Media, confirmed last week that he reached out to Geller to offer her 100 billboards in the St. Louis area at a fair price after her billboards were rejected by the Washington Metropolitan Area Transit Authority. The agency's heavy-handedness annoyed him, he says.

But Fuller also admitted that part of his motivation was business-related -- which made us wonder if these billboards might be clustered in less desirable locations. We have yet to notice any, for example, in Creve Coeur or along the city's tonier highways.

Readers have reported seeing them in south city (across from Chris' Pancake House) and in Hazelwood near the Boeing campus. At the RFT Music Showcase on Saturday, we spotted one in the Grove.

Don L. says he's personally spotted "Draw Muhammad" billboards cropping up in Wells-Goodfellow and just north of downtown. The one shown at the top of the post is near Goodfellow and Wabada, in the heart of north city.

"This is the equivalent of yelling fire in a crowded movie theater," he says. "Free speech is free speech. But if I yell 'laugh,' no one's going to get hurt. If I get fire, someone might. We have a full plate of social and political issues in this city already. We don't need this too."

Fuller sent us a map of the billboards owned by his company, and says he distributed the AFDI's work throughout that entire inventory. Then he wrote this message, which we've edited only for typos and reprinted in its entirety:

I distributed these throughout our territory. And to suggest that no affluent white people EVER traverse these neighborhoods is elitist and racist. I spend an hour or two at each location, I see white, black, Asian, and Latino and a ethnically diverse commuter basevdriving and commuting up and down Kingshighway, Delmar, Goodfellow, Skinker, Kienlen, etc etc. I see them, I pay attention to the commuters and resent the implication that I flooded by the ghetto with these ads .....it's only a white-free zone because the comfortable white guiltist will only donate to black causes and they are racistly unwilling to go to the ghetto and spend real money in real businesses. Because the white guiltists are shallow, egotistical, self-centered hypocrites

Fuller also sent us this photo, which he says shows the way he replaced the once-defaced Muhammad billboard with a new message: