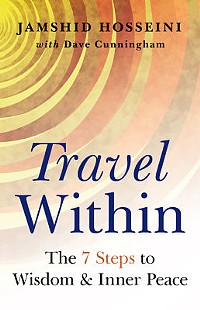 Maybe it's because it's Good Friday, or maybe it's because of this week's cover story, or a rerun of Married...With Children we caught the other day (the one where Al sells his soul to the Devil in exchange for taking the Chicago Bears to the Super Bowl) but Unreal has been a bit preoccupied with death lately. What's it like? Is there really a tunnel of light? And joyous reunions with every other dead person you've ever known?

The other day, as we sat at our desk pondering these deep questions, a press release popped most providentially into our e-mail in-box. It read, in part, "Jamshid 'Jim' Hosseini has been rich and poor, Persian and American, Hindu and Buddhist, alive and dead." Hosseini died by drinking a concoction made of honey, milk, tea and cobra venom, had a mystical experience and then returned to talk about it.

Well, gee, we thought, if anyone could tell us what it's like to be dead, it would be this guy. We gave his publicist a ring, but she told us we'd be better off talking to Dave Cunningham, who ghost-wrote Hosseini's new book Travel Within: The 7 Steps to Wisdom and Inner Peace (O-Books, John Hunt Publishing, Ltd.). "Dave is much easier to understand," she said. Dave was also really excited about his and Jim's upcoming book tour. Dave Cunningham: We're starting our tour in Southern California. Jim asked me to come with him. He's out of his element when he has to do public speaking. But I'm a journalist and have written a few books, I've done this before.

Unreal (eagerly): What about the cobra venom?

Everybody asks about that. It really catches people's attention.

Well, it was at the top of the press release.

A producer from the Hannity show called us up. Sean Hannity is a religious conservative. The book is non-religious, but there's a chapter on mysticism. Jim is really excited. He's independently wealthy and so am I, so money is no object to traveling out there.

Jim was one of five people who did it. He was in India and was following the Hare Krishnas and this Hindu monk and the monk said when someone reached the level of attainment, he'll be free of what keeps him bound to fear. If you continue to fear death, you'll never be free. So in order to conquer their fear, they all drank this concoction of milk and honey and tea and cobra venom.

Now you're talking! What happened next?

Jim drank it. He felt fear unlike any he'd ever felt in his life. There was a searing pain throughout his body. He was thinking, "Oh, my God, why did I do this? I'm a fool. This is the stupidest thing I ever did."

And then there was a change. He started to feel no pain. He wasn't aware of his clothes or the temperature of the air or the ground beneath his feet. He was released. He saw the light, all those near-death-experience cliches. His mind started replaying scenes of family dinners from his childhood. He thought, "Am I really dying or is my mind playing tricks on me?"

We asked a Harvard professor of genetics to explain and he told Jim that what he probably experienced was this: as your brain cells start to die, they fire in a certain way and that triggers childhood memories.

Then Jim came out of it. He doesn't know how. Monks are mysterious about things like that. Either a doctor ministered to him or the monks are so experienced, they know the exact dosage of cobra venom.

Jim said he experienced millions of years in a matter of seconds. He believes he experienced the Big Bang and everything that has happened since. He realized that we are all stardust. The elements in our bodies are the same that were present at the Big Bang.

Jim doesn't recommend cobra venom, by the way. He says meditation is the safest, cleanest way to reveal the truth.

It's all in the book. It's New Agey, but easily understood by the masses.