Driver Killed in Crash After Trying to Avoid Dead Deer 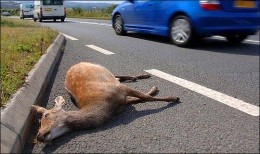 Image via
Driver dies trying to avoid dead deer in Imperial
On Wednesday morning, Keith A. Labitska was driving north on I-55 in his 2005 Chevy Malibu, according to the Missouri State Highway Patrol.

The 41-year-old from Imperial saw a dead deer in the roadway near the Imperial Main exit just after 8 am.

He swerved off to the right, left the road and struck a bridge.

He was pronounced dead shortly thereafter.

The MSHP's report states that Labitska was wearing his seat belt.