As the midwest runs dry, we can all cool off in the Smallin Cave 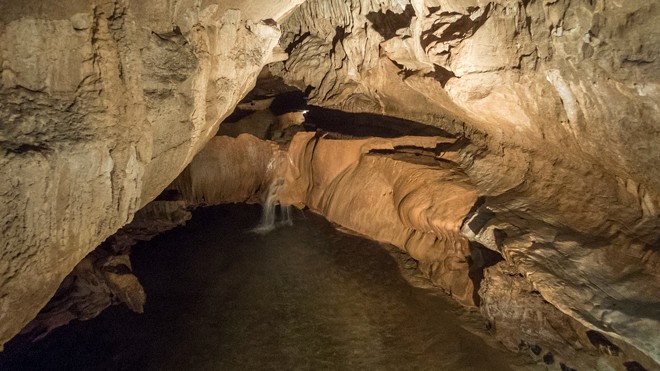 First there was Tower Rock north of Cape Girardeau, then the Diamond Lady Casino boat near Memphis, now the prolonged drought affecting the midwest has opened up previously water-logged portions of a popular southwest Missouri cave.

The Smallin Cave has been a tourist destination since the 1960s. It regularly hosts tours and spelunking expeditions. It's often referred to as the Smallin Civil War Cave due to its purported use during the conflict.

According to Heartland News, the cave's main passage runs about a mile. But amid Missouri's current prolonged drought, another 1,100 feet of the cave is now able to be explored.

They say that over the years they have found Civil War-era bullets and a tooth from a Mastodon, an animal that went extinct 10,000 years ago.

Someone once found a Model T inside, too.

Though the drought is leading to an uptick in people visiting the Smallin Cave, it is having the opposite effect elsewhere.

St. Louis Public Radio reported this morning that operators of riverboat cruises are drastically cutting back their tours, or in some case canceling them altogether, because of the Mississippi River's near-record low water levels.

The drought is severely hampering agriculture and restricting shipping on the Mississippi, but, hey, when the planet really starts to bake at least we can all cool off in the cave.