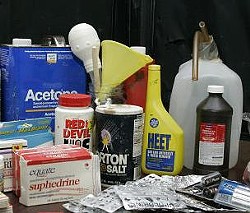 Mmm, yummy! The building blocks of meth.
Missouri state representative Scott Lipke (R-Jackson) wants to limit the sale of medications such as Sudafed and Clairtin-D only to consumers with a doctor's prescription.

Lipke's bill (H.B. 1210), introduced to the General Assembly last week, aims to curb the supply of drugs containing the active ingredient psuedoephedrine -- one of the main ingredients for methamphetamines.

On its face, Lipke's bill seems to make sense, especially in Missouri which is one of the biggest meth-producing states in the nation. (A similar law in Oregon eliminating the over-the-counter sale of psuedoephedrine has dramatically reduced the number of meth lab bust in that state.)

But don't tell that to the drug companies that are already mounting a campaign to kill Lipke's bill with a rather questionable plan of their own.

As the Springfield News-Leader reports today, drug manufacturers say they're willing to pay for an electronic-tracking system in Missouri that would monitor the sale of their products.

The system requires consumers to swipe their driver's license each time they purchase cold remedies containing psuedopephedrine. Law enforcement and pharmacies can then track how much of the drug any individual purchases and deny the sale of the drug should a person exceed their limit.

Arkansas and Kentucky operate a similar electronic tracking system -- not that the system is necessarily working in those states.

In Kentucky, lawmakers are now proposing a law to require a prescription for psuedephedrine after the number of meth lab busts increased with the electronic tracking system.