E. Coli Closes Beach at Lake of the Ozarks 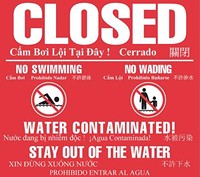 The Missouri Department of Natural Resources has closed a popular beach for swimming after the water tested dangerously high for bacteria this week.

Public Beach # 2, also known as Grand Glaize Beach, inside Lake of the Ozarks State Park is closed for swimming until further notice. The DNR had just opened the beach last week after it was closed for two weeks following the discovery of harmful bacteria.