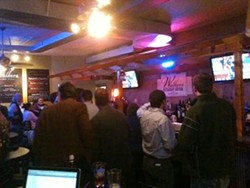 Watching the Redbirds at the Prop. E watch party.
Daily RFT swung by Walker's Restaurant and Bar in south city last night to check out the watch party for Proposition E -- the initiative to retain the one-percent earnings tax in St. Louis.

We don't know if more people were there earlier in the evening, but when we arrived around 9:45 p.m., the crowd was down to about 30 people huddled around the bar watching the Cardinals cling to a 3-2 lead. That game, at least, had some tension. The same could not be said for Proposition E.

By the time the final vote was tallied around 10 p.m., Prop. E had passed with 87.5 percent of the vote. Even Mayor Francis Slay, who helped raise some $650,000 to retain the earnings tax, seemed a bit bored with the results. Sure, he was pleased with the victory, but one of the first things he wanted to talk about was how to use Proposition E to re-examine how the city and the region works.

"Today's vote shows that the overwhelming number of St. Louisans thought it was irresponsible to get rid of the earnings tax without a viable way to replace those funds," Slay told Daily RFT. "But does that mean we just forget about the earnings tax after tonight? No. We now have five years to see if we can come up with a better way to tax and fund the city."

Proposition E was placed on the April ballot after St. Louis financier Rex Sinquefield spent more than $11 million successfully pushing a statewide initiative last November that bans other cities from having local income taxes and requires St. Louis and Kansas City to vote every five years to retain their tax. (Kansas City voters also approved of their earnings tax yesterday by a margin of nearly 8-2.)

Slay said that he plans to start discussions soon with "lots of interested parties that want to come to the table and see how we can move forward" in addressing the earnings tax dilemma, which has been blamed for St. Louis losing and/or failing to attract businesses. Last night, the mayor again suggested that part of that answer lies in the city and the county working together to share certain services to reduce costs and improve efficiencies.

"We need to look at ways we can make the entire St. Louis region compete better instead of always fighting against ourselves," said Slay.

Keep up on all the latest St. Louis news and gossip by following @chadgarrison on Twitter and Daily RFT on Facebook.