East St. Louis Mayor On Concealed Carry Law: "More Guns...On The Street Is Not The Answer"

East St. Louis, Illinois, mayor Alvin Parks says he is not in favor of having more guns on the street -- but pretty soon, he won't have a choice.

Illinois is on its way to adopting a concealed-carry law, which means it will no longer be the only state in the country with a ban on firearms in public. This change is mandated by a federal appeals court that ruled last year that the state's ban is unconstitutional. It's still uncertain exactly what the final version of this law will look like, but the change will happen -- and soon.

"We will support whatever law comes from the state of Illinois as fervently as we can," Parks tells Daily RFT, but later adds, "More guns being on the street is not the answer...for a safer community."

As we reported earlier this week, the state legislature in Illinois has approved a concealed-carry bill, but the governor has not yet signed it and could veto the measure. Meanwhile, some state prosecutors -- notably Madison County State's Attorney Tom Gibbons -- have said they will, effective immediately, allow concealed carry. Other law enforcement agencies have said they are waiting until the law is formally changed.

Some form of concealed carry will have to be implemented in Illinois in the near future and will likely allow residents with proper certification to carry loaded firearms on them and in their cars.

And Parks says he is prepared to enact the new state law in East St. Louis, even if he has not supported concealed carry in the past. 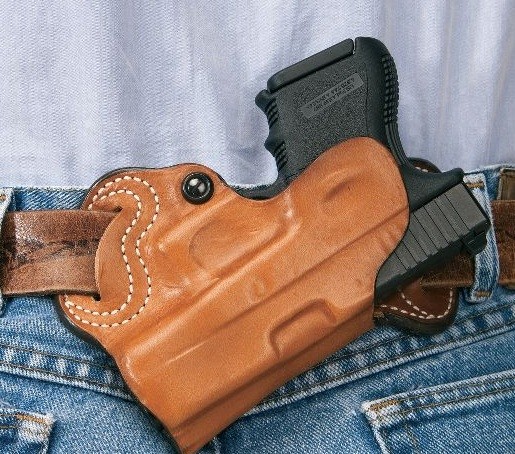 "I have been a staunch opponent of carry and conceal, because in many cases...a person resorts to that as a first line of defense," he says. "'If you don't treat me right, I'm going to show you why you should've treated me right'...as opposed to, 'Let's talk through the situation before we resort to a physical confrontation.'"

Whatever the final version of concealed carry may be, he says, "We plan on supporting it with all the enthusiasm and vigor we can as a city."

Parks says his biggest concern is maintaining bans on guns in any establishments that have alcohol, such as bars and nightclubs.

"I'm going to be staunchly opposed to weapons on those premises," he says. "Alcohol and guns don't mix. They just don't mix. Just like alcohol and car keys. Drinking and driving just doesn't mix."

He says, "I will be encouraging individual business to make those choices," pointing out that these establishments can and should have bans on firearms.

It's important to him, Parks says, that schools, churches and other institutions have bans as well.

Parks, who is also the city's liquor commissioner, says that he will, if necessary, consider some sort of citywide ordinance that bans guns from certain kinds of establishments that serve liquor. He is, however, hopeful that these joints would make that decision independently to reduce the risk of violence.

"It's very important that individuals who may have a beverage or two in their systems don't end up resorting to [guns]...as the first line of defense in any kind of antagonistic or confrontational situation," he argues.

Parks says that there has been a decrease in shootings and crime tied to the nightlife in East St. Louis and wants to be sure that a new gun law would not reverse that.

via Facebook
Illinois Governor Pat Quinn who must soon weigh in on a passed concealed-carry bill.

He says that he recognizes that concealed-carry may create useful protections for armed residents in some cases. "It protects victims perhaps a little bit better."

Parks says that it could be useful to prevent carjackings and discourage criminals from committing these kinds of crimes, for example. But ultimately, he adds, he remains concerned about the individuals who may now reach for their guns instead of opting for a more peaceful solution during a confrontation.

For now, he says, East St. Louis will continue to enforce the current ban on the books -- unlike some officials who have put out statements saying concealed-carry is permitted going forward.

"We will wait for the state of Illinois," he says.