Anyone who has ever worked in the restaurant business knows the heat is not confined to the kitchen. On any given night, if you step behind the scenes at your favorite eatery, you're likely to see displays of mating behavior right out of a nature documentary. Cooks hitting on hostesses, servers groping each other behind the beverage station, quick hook-ups in the dry storage — it's a wonder any food makes it to the table.

This isn't a knock on the hardworking folks who work in the industry. The business is tough. Long hours and a high-stress environment naturally breed a closeness not found in most other sectors. As such, relationships form quickly and burn bright.

And they don't always fade away.

Proof positive are the many examples of long-lasting love found throughout the kitchens and dining rooms of some of St. Louis' most successful restaurants. A few couples work the line side by side, some divide up the front and the back of the house and others have found it's better to work at different restaurants entirely. All, however, share the common challenge of making a relationship work in an industry notorious for its disregard for work-life balance.

We were curious. How do they make it work? Are they able to talk about anything other than the business after hours? What drives them craziest about working with their significant other? And, perhaps most importantly, when did they realize it wasn't just a kitchen romance?

These are their love stories.

COURTESY OF THE FAURES
Simone and Damien Faure with son Maxim, four.

"We ended up talking for hours and realizing how much we had in common even though we come from such different backgrounds. I'm from the projects of New Orleans and he's from the French countryside – but once we started talking, it was just easy." – Simone Faure

The first time Simone Faure heard her future husband's voice, she thought it was someone doing a bad Borat impression – and so she hung up on him. "Simone was actually the first person I talked to at the Ritz," Damien Faure recalls. "I called the kitchen phone to tell them that my plane was running late and she said, 'I don't have time for this, Gary' and hung up on me."

At the time, Simone was working in the pastry kitchen at the Ritz-Carlton New Orleans. Damien was being brought in to reopen the property after Hurricane Katrina.

But when he identified himself, Simone thought her coworkers were pranking her. She remembers the phone call slightly differently.

"The guys in garde manger had been razzing us – they'd call the pastry kitchen and do these crazy accents and order all of this food, telling us they needed it on the fly, and then it would turn out it was for no one. So when the phone rang that day I said, 'I've got this,' and answered. 'Chef Damien, is it? We'll be right there. We're going to send a car for you and they'll have your name on a little marker.' Then I hung up and told everyone, 'Ha! I got their asses.'" 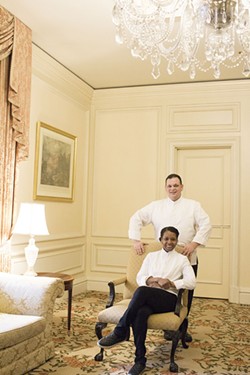 PHOTO BY MABEL SUEN
Though they met on the job, Simone and Damien now work together only for one-off events, like a grand "Soiree d'Amour" scheduled for the Ritz-Carlton St. Louis on Feb. 14

Damien might have held the episode against her had he not fallen in love at first sight. The French chef, who grew up in a small town in France and had been trained at Michelin-starred restaurants in Paris, had planned on staying in New Orleans for only a month or so before heading back to his home country. Then he met Simone.

Despite his feelings, the relationship got off to a slow start.

"If he was pursuing me, then he didn't have any game," Simone laughs. A self-made woman from the projects, she became increasingly annoyed with Chef Damien's regular visits to her kitchen.

"He'd come into the pastry kitchen and say, 'I need such and such' and ask me to get it for him," Simone remembers. "Then, like fifteen minutes later he'd come back and ask for something else. My friend said, 'Oh girl, he's cute and I'm thinking he's into you,' and I told her, 'I'm thinking you need to go back to stirring that batter.'"

After what Damien recalls as a half-dozen attempts at asking her out, Simone finally agreed to a date that consisted of redfish takeout in the hotel room where she was living at the time. An hours-long phone conversation, a long-distance relationship and several visa issues later, the two are now married, raising four-year-old son Maxim and balancing the demands that come with being one of St. Louis' most talented culinary couples.

They now work separately: Simone is chef and owner of the acclaimed Botanical Heights patisserie La Petite Choquette, while Damien is chef at the Ritz-Carlton in Clayton. It's an arrangement they prefer, at least for now.

"When we worked together at the Ritz-Carlton in St. Louis we talked about the need for him to call me 'Chef' versus Simone in the kitchen," Simone explains. "He'd want to walk in and give me a good morning kiss and say, 'Hello ma vie.' I didn't need people looking at us differently."

The laidback good humor that irritated Simone in the professional kitchen, however, is what she loves most about Damien in real life.

"If you ask Damien what his goals are he will say that his first goal is to make sure that me and Maxim are happy," says Simone, 42. "He doesn't tell you that he has to be executive chef of such-and-such restaurant by the time he is 40. He just wants to see the joy in people when they eat his food. It goes beyond the plate for him. He shares himself with people."

It's the perfect balance, in that Damien admires Simone because she is so driven.

"Everything Simone has done in her life she has done for herself," Damien, 34, explains. "She's where she is because of her hard work, and she always keeps a positive attitude — she never feels like something is the end or that she can't do anymore. I wish I was like that. She's much more impressive than me. I just have a beautiful accent."