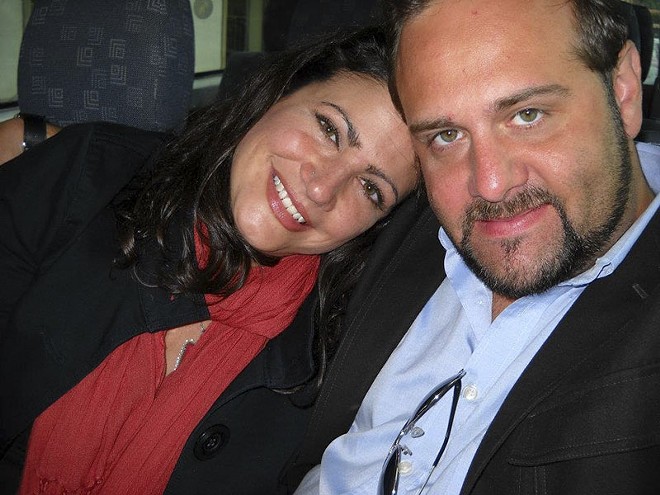 COURTESY OF NICK LUEDDE
Audra and Nick Luedde met in Chicago, but moved back to Nick's hometown to open the Libertine.
Nick and Audra Luedde

"We had drinks, we went to the restaurant opening and had dinner, then went to a wine bar — she out-blind-tasted me. Then we danced in the rain and she kissed me in the back of a Chicago cab." — Nick Luedde

Audra Luedde's boyfriend at the time didn't realize it, but he was inadvertently setting his lady up with another man.

Both Audra and her guy were wine reps in Chicago, she recalls. "I had a really horrible day and met up with my boyfriend at a mutual account we had," recalls Audra. "He said, 'You know if you are having a bad day, go see Nick Luedde, because if anything he will give you the time and respect that you need."

At the time, Nick, a St. Louis native, was managing a fine-dining restaurant called Feast in Chicago's Bucktown neighborhood. When he saw Audra, he wanted to give her more than just his time.

"I was very single and she was hot," Nick admits. "She came in and we hit it off right away. I had a little busboy named Jose who had worked for me for a long time, and he knew I was into her and we would always flirt all the time. As time went on and she came into the account, he would always have flowers set up on the table in the corner and everything. I was like, 'What are you doing here, man?' and he'd say, 'This is for your wife. I see it in your eye.'"

For nearly eight years, the Lueddes worked in several high profile positions in Chicago's restaurant scene — she as a wine rep and wine buyer, he as a sommelier and beverage director. The pair dreamed of opening their own place and had been tossing around ideas for years, but they knew that they would not be able to afford to follow through on that dream without sacrificing their independence to investors.

When Audra got pregnant with their first son, Miles, they realized the support they needed could come from Nick's family in his hometown. And that, coupled with the comparative affordability of opening a restaurant there, made St. Louis the right move. They packed up and began shopping around for what would become their critically acclaimed Clayton eatery, the Libertine.

"Everyone tried to talk us out of [opening a restaurant together], but it's all we've ever wanted to do," Audra says. "It's who we are. If you don't love it, you can't be in this business. And having worked together, we know each other's weaknesses very well."

Three years later, and now balancing the demands of two sons (Miles is now four; Luke is four months) the Lueddes credit their ability to balance each other as the key to their success.

"Nick goes way overboard and I am a little more understated. I have to reel him in," Audra, 37, explains.

"It's different when you are a married couple, though," Nick continues. "I come home and we crack open a bottle of wine and the kids are in bed. We just come up with menu plans and ideas and go over everything together. I mean, when was the last time we argued?"

"Well, I don't know," Nick says, "but we've been together so long that working together just isn't a thing. The restaurant is an extension of us, really. I mean, it's us."