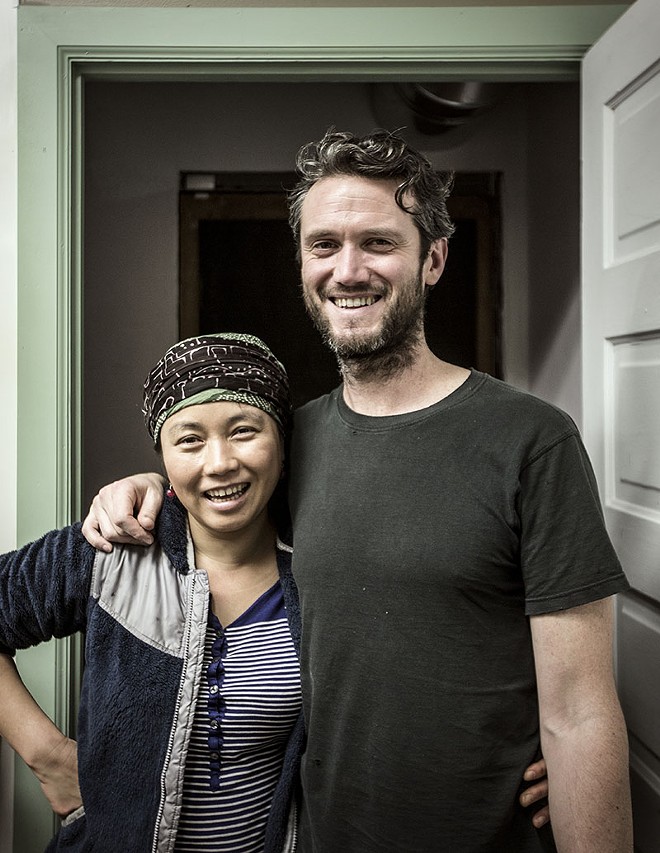 “When I first saw Lona I lost my breath.” – Pierce Powers

It sounds like a dating nightmare right out of a women’s magazine –- when Pierce Powers first took out Lona Luo, he ran out of money and she had to pay for their food. But that apparent misstep is actually what sealed the deal.

Luo, who grew up in a remote village on the southwestern frontier of China’s Yunnan province, was apprehensive of dating the American Powers, precisely because she was concerned that he was wealthy.

“I didn’t know what kind of social class he came from and I was scared to date rich people,” Luo explains. “I am from a really poor area and it’s embarrassing to show where I am from and how poor my family is. But when I went out with him, I realized he was really simple.”

Powers’ and Luo’s love story is as unlikely as any. The first in her family to read and write, Luo left home to work in a Japanese restaurant at a swanky resort in Yunnan’s capital, Kunming. Powers, who is from St. Louis, had moved to China to teach English and found himself assigned to her resort to train the staff.

He didn’t think about dating when he was there because of overwhelming cultural differences. Then he met Luo and everything changed.

“When I first saw her I lost my breath,” says Powers. “My first impression of Lona –- she had this stride and this diva essence that was just crazy. Everyone sees that in her. She is the kind of woman who loves to compete with alpha men. When we go hunting she just schools all the hillbillies with a knife when she cuts up a deer. They ask her for help. She’s just tough. When I met her it was like I met the matriarch that every male wants.”

Luo was equally interested in Powers, but for a different reason – he could take down an entire pot of her soup. “When I left to go to work, I had a big pot left and he finished the whole thing,” she recalls. “I was like, ‘Oh wow, this is my future man.’ I just wanted him to eat everything and enjoy the food I cooked.”

Powers and Luo married in her village and moved to the United States after she became pregnant. Luo’s friends discouraged her from taking such a leap. She wouldn’t be able to make it, they said, because of her lack of education and language skills. To prove them wrong, she got a job waiting tables less than two weeks after moving to the U.S.

“We are super different,” Powers acknowledges. “I’m like super emotional and a social worker, and she’s like, ‘Pull yourself up by your bootstraps –- that’s how I roll.’ She’s got the mentality that if she doesn’t know how to do something, she’ll figure it out.”

One thing Luo figured out how to do – with Powers at her side –- is to cook food that has St. Louis lining up for more. After selling dumplings from a food stall at Soulard Market, the pair opened their fast-casual restaurant, Lona’s Lil Eats, in Fox Park in 2014.

Though labeled as Chinese, the restaurant’s flavors, straight from Luo’s village, are unlike any other Asian restaurant in town. And the neighborhood had never previously been a dining destination. Still, the critics swooned, and the restaurant is packed just about every night.

Powers runs the front of the house and leaves the cooking to Luo, an arrangement they credit with keeping them sane –- most of the time. The stresses of running a restaurant, they acknowledge, can sometimes take a toll.

“It’s really hard,” Powers says. “Doing business together has actually been good for our relationship, though. When we are struggling it brings us closer. When we don’t have that it gets more difficult. Working together is both the toughest and the most rewarding thing.”