PHOTO BY DANNY WICENTOWSKI
A glass structure housing a set of stairs that lead to nowhere but ruin. If only that was an easy allegory for something happening in the world today.

St. Joseph has a rich and storied history. Situated on the Missouri river, it was the starting point of the Pony Express, in some ways truly the Gateway to the West. It was also the scene of Jesse James' death, and the birthplace of Walter Cronkite and Eminem.

At the beginning of the twentieth century, St. Joseph was home to some 100,000 residents and three major meat-packing facilities — making it the fifth largest hub of meat-packing in the entire world — but those jobs left town with the introduction of refrigerated trucking. By 1910, the city's population dwindled to 77,000; it's stayed roughly the same ever since.

There's still one large hog-processing plant in town, and it's the city's second largest employer, but nowadays most people work in manufacturing, financial services, and education and health services.

The city has maintained an unemployment rate lower than that of Missouri as a whole for the last ten years, save for one month in 2011, when it briefly rose above the state by a tenth of a percent, according to the Bureau of Labor Statistics. Obama's final years were good to St. Joseph, as the rest of the state: Unemployment dropped from its mid-'90s high of 12.4 percent to 9.8 percent in early 2010 and then down to 4.8 percent last August.

Yet Buchanan County voted sweepingly for Trump over Hillary Clinton in November — 59.28 percent to her 33.4. Trump easily outperformed more typical Republicans: Senator Roy Blunt eked by with only 49.56 percent of the vote.

From my hotel on Frederick Avenue, east of downtown, the city looks to be a never-ending sea of strip malls and corporate eateries. Across the street is a Denny's, next door to a Red Lobster. Adjacent to that is an Applebee's. We're within walking distance of Texas Roadhouse, Golden Corral and Bandana's Bar-B-Q as well. It's no wonder that new McDonald's was such big news. This city loves its chain restaurants.

The receptionist at the hotel is a friendly young lady who is excited to tell anyone who will listen about her new truck. "It's a Ford, though," she says, "so I'm definitely gonna catch hell from my family for that." (Hers is a Chevy family, apparently.) A room is a scant $55 a night, and the bedsheets are clean enough.

Right next door to the hotel is an abandoned waterpark/hotel hybrid, partially destroyed and gutted for scrap. Piles of twisted metal are stacked well above six feet high — any resource of value has been sucked clean out of the building, leaving a hollow, collapsing shell. A pile of mattresses, once a source of comfort for the downtrodden and weary, sit outside in the night, rotting.

PHOTO BY DANNY WICENTOWSKI
No room at the inn.

The fog is unusually thick on this night, but through the hazy dreamscape I can still see a glass-encased structure that houses six flights of stairs. At the top, there's a hole where a six-story water slide had once been. There is, from here, nowhere to go but down.

Beneath the stairway to nowhere is what used to be a "lazy river" pool and a child's waterpark playground; pieces of the ceiling have fallen from above, much like Chicken Little's sky, and are now littered across both.

Inside the abandoned hotel portion the scene is even more apocalyptic. Walls vital to structure are torn asunder, their innards exposed. A closet for employees still has clothing hanging in it. A large box of Bibles has been left, completely abandoned.

On a battered wall in the lobby an official-looking certificate remains, framed and hung with care. In large script across the top, it reads, "Focus on the Future."

I wake up on Inauguration Day in a panicked sweat. Flipping on the television around 9 a.m., I see that soon-to-be-President Trump has decided that today is a Red Tie day, which I take as an ominous sign. I've noticed over the past eighteen months that Trump's choice of tie color serves as an interesting window into his overall demeanor on any given day — kind of like a mood ring. Blue is the calm, relaxed Trump, cooing softly in your ear about how great and tremendous everything is going to be. Red is the fiery, angry Trump, shouting loudly about his many enemies. He usually picks red.

Heeding last night's omen, I take a deep breath and focus on the future — the "McDonald's of the Future." On the road I pass a billboard with a photo of a box of fries, advertising "Endless Love" just ahead. My mouth waters. 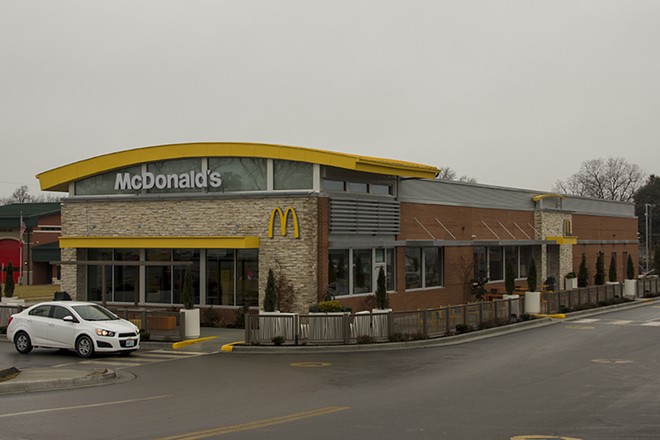 PHOTO BY DANNY WICENTOWSKI
The McDonald's of the Future.

From the outside, my destination mostly just looks like a regular McDonald's, albeit a large one. But inside, it's the future, baby.

Which is to say it kinda feels like a Chipotle. Unpainted wood slats form an important part of the decor. The furnishings have a mid-century look — instead of the usual booth or table options you'd find in a McDonald's of the Past, there are countertops and barstools, circular tables and ergonomically designed chairs. Pretty much any edge that can be rounded is rounded — as we all know from the aesthetic choices of the automobile industry throughout the years, rounded edges are more future-y than sharp angles.

Strangely, however, the restaurant doesn't have any TVs — based on the nation's most recent choice of top executive, it seems very likely the future will include televisions. There are monitors throughout the room encouraging you to purchase various McDonald's items, but none on which to view the day's news.

I set up my laptop instead (free wi-fi does indeed exist in the future). I also pull out a kitchen scale so I can weigh my food before consuming it — in order to properly document my consumption, because I'm a journalist, dammit.

I quickly learn that the future will include automation of labor, which is well-represented at the restaurant. Still, when I approach the ordering kiosk and search for the specialty burger Josh referred to the night befor, I soon become frustrated and call a worker over to help me. I predict this will be a feature/bug that pops up frequently in the future. I choose the "pico guacamole burger" meal; my total comes to $7.71 with tax. The burger itself soon finds its way to the garbage, as it is obviously unnecessary.

I take a placard with my order number on it to one of the booths: In the future, your McDonald's food is brought to your table for you, lest you burn off any of those incoming calories by carrying your own stuff. I jealously eye the woman sitting behind me, who has laid claim to a couch/booth combo — that is to say, basically a regular old couch with a table mounted in front of it. It looks comfortable, and I begin plotting my invasion.