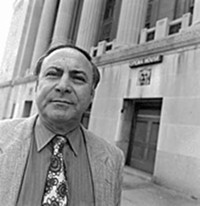 Today I got my answer. It arrived in the mail in a neatly typed letter from Mr. Golterman himself.

Golterman -- as many of you know -- is the local gadfly who has made a name for himself over the past decade annoying the media and ribbing politicians about the shuttered theater. As Golterman will tell anyone or anything (fence posts included), Kiel has sat vacant since 1991 because the city's powers-that-be are involved in a grand conspiracy to destroy the historic theater.

Now, though, comes news that St. Louis Blues chairman Dave Checketts wants to spend $50 million to $60 million redeveloping the opera house. If all goes according to plan, the building would re-open in time for a Christmas musical in 2010.

So, is Golterman happy? Not exactly. He wants credit for saving the building.

In his note to me written on Valentine's Day (a love letter, Ed?), Golterman writes:

The 'boys' don't like to be embarrased. They pay public relations firms to spin and cover up their mistakes, and it is all about ego. If they can, they will position it that Dave Checketts 'saved' Kiel Opera House with their help. That it was the proper time. No. That's not how it was, or is.

There is some significant truth to be communicated before the blanket of hypocrisy drops over it all. Dave Checketts did not save Kiel Opera House...You know who saved Kiel Opera House over a critical period of time in her history. You have it all in your files.

...The people who saved Kiel were led by Ed Golterman, Russ Carter, Jeff and Ele Steward and the late Jim Heidenry.

So, let the record stand. Ed Golterman saved Kiel Opera House. How do we know? Because he says so.

Oh, btw, Golterman notes that the hockey gods are happy with the deal to redevelop Kiel. Continues Golterman:

Have you noticed the Blues started making a remarkable run as Checketts announced he was proceeding with Kiel? Is there a connection? Of course. Always has been.