Ed Martin Concedes -- But Not Before Taking Swipes at Election Process 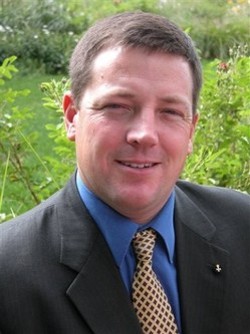 Martin concedes even while continuing to suggest the election was stolen.
Six days after the election, Ed Martin has conceded that he does not have enough votes to win the Third District race for U.S. Congress. The Republican challenger phoned incumbent Congressman Russ Carnahan this morning to congratulate him on his victory.

Martin lost the race by some 4,000 votes, with Carnahan taking 48.9 percent of the vote compared to Martin's 46.7 percent. Because he lost by more than one percentage point, Martin could not demand a recount -- though he could allege election improprieties and demand an investigation.

That's just what Martin did on Wednesday, alleging that computer glitches may have cost him votes and that a security firm hired by the St. Louis Election Commission may have sabotaged the election. How else to explain all the late votes from the city that went to Carnahan?

Well, as the investigation uncovered, those late votes for Carnahan actually came from voters in St. Louis County and not the city. Given that information, Martin accepted defeat, though not before taking some swipes (highlighted below) in the following statement released this morning. Oh, and he suggested that he'll run again in 2012.

In the early hours of Wednesday, November 3rd we learned that a slim lead our campaign enjoyed disappeared in a surge of votes. At the time we understood that these votes were coming from as few as three precincts from the city of St. Louis. On its face this sudden end-of-night surge was suspicious. We understood that St. Louis had finished reporting. Mathematically, several thousand votes from a small number of precincts was implausible.

Given the history of St. Louis and the state of Missouri where our Secretary of State has refused to take responsibility for compelling local boards of election to purge voter rolls of ineligible registrants, voter fraud looms large in the mind of voters. A sudden wave of votes is easy to associate with an unscrupulous few who might have a few thousand votes on standby in case an election was close and their candidate needed help.

Irregularities and outright computer system failures on the part of the Secretary of State's office, coupled with the unexplained hiring of a security firm with close ties to both the Democrat party in Missouri and my opponent were also on their face suspicious. I believe that election officials need to make decisions that are above and beyond the appearance of impropriety.

For this reason, and against the backdrop of smaller irregularities reported by voters I determined that it was important to review the events in the last few hours of the tallying of votes, as well as the decision to hire this security firm. Our team of hundreds of volunteers and thousands of supporters had reasonable reasons to be suspicious. While it would be irresponsible to make accusations that exceed the evidence, there was at the time ample reason to be concerned. Voicing those concerns was a difficult thing to do but I felt it was the right thing to do. If something was amiss, nobody would look unless the right questions were asked publically and forcefully.

Since Wednesday afternoon we have learned that the votes were not from three to seven precincts in the City, but rather included unreported votes from the northwest precincts of St. Louis County encompassed by Missouri's Third Congressional district. In light of this new information, the implausibility factor evaporates along with my concerns about voter fraud in that late surge. And, although I have concerns about other incidents and improper conduct on election day, I no longer believe these concerns are sufficient to continue our review of what has occurred or delay agreeing that this election is over.

Before I go further, let me congratulate Russ Carnahan on his win. In the end, his team came up with more votes than ours and that is that. I wish him well and look forward to his finding ways to represent our interests with the new majority in Congress. A few moments ago, I called him to convey this.

I also want to congratulate my own campaign. We came as close to defeating an incumbent in this race as anyone has in decades. The energy and support was amazing. Many candidates cooperated with our campaign to get out the vote and distribute literature. Energizing conservatives within the district may not have been enough to propel my campaign to victory, but I am glad to see so many good men and women take seats in the Missouri State House and Senate. Not a bad few months work!

As the facts have become public about misconduct by the chair of the St. Louis City Board of Elections, an accounting of why a private security firm was hired needs to be forthcoming. The city of St. Louis has many things it needs to spend its resources on. If the election board needed additional security why was it not procured from the police department. There may be a good explanation for this. I, and many voters in the city, would like to hear it.

As to the central computer system that failed on election day making it very difficult to validate a voters eligibility to vote, I do think it is important that Secretary of State Robin Carnahan explain this failure. In particular, Carnahan owes an explanation to the voters who were inconvenienced - some to the point of not being able to vote - by a registration database system that is tasked just a few times a year and was wracked with issues on election day. A critical system such as this at a critical time ought to be managed and maintained in such a way that confidence in free and fair elections is not compromised. A great deal of goodwill has been built in the last few years regarding elections, and this single blunder has unraveled at least some of that.

Finally, after asking for input, we have heard from hundreds of citizens about problems with voting or voter registration. These problems are real and far too common - or so it seems. The heart of our republic is a voting system that works fairly, with regularity, and which inspires confidence. I fear that the legion of problems threatens the integrity of our voting system.

Our campaign was about empowering people to get involved in politics to change the course of our nation by stopping one-party rule in Washington. This has been accomplished by other victories even as we came up short. Our campaign also sought to instill confidence in the citizens that their voices and votes matter. Mishaps and misconduct like we saw last Tuesday threaten this confidence. In the coming weeks and days, I will continue to seek to highlight the importance of protecting our voting system and will ask you to assist me in this effort.

Thank you to all and thanks be to God for the blessing that is the United States of America.