Elain Kay Young and Katherine A. Mock: Convicted of 2006 Murder for Hire 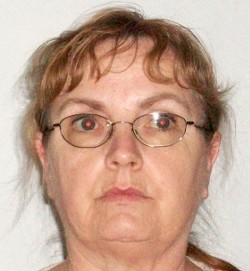 Elain Kay Young: she's no Farley Granger, is she?
Two rural Missouri women were found guilty of conspiracy to committ murder for hire as a tandem, despite their partnership falling apart and each woman turning on the other in court. Elain Kay Young, 57, and Katherine A. Mock, 58, face life in prison for the crime, which resulted in one man's death. The story reads like a backwoods version of Hitchcock's Strangers on a Train.
Young married her fourth husband, Melvin "Beau" Griesbauer, for the oldest of reasons -- his $1.2 million insurance policy. The prosecution claims Young needed that money to save her family farm/dog breeding business, and a fourth divorce would have been too costly.
Enter Katherine Mock, who begins asking her relatives if any of them wouldn't mind killing a man in exchange for a payout. Mock bought a ski mask and gloves, which somehow ended up with both her and Mr. Griesbauer's DNA on them. Mock's attorney argued that Young convinced his client that Griesbauer was abusing his wife, and that Young had no other way out of the violent marriage. Mock also claims that Young tried to kill her by making her eat a bag of Vicodin, which has to be one of the slowest possible methods of killing.
Young denies it all, denies that she even knew Mock was looking around for a Bumpuss hitman. And yet prosecutors produced a witness who testified that Young had offered him $10,000 to kill her third husband, and in return she'd kill the man's wife. "Criss-cross, criss-cross!"
Prosecutors also noted that a month after Griesbauer's death, Young had a new boyfriend -- they move quickly in the country -- and that soon had herself listed as the beneficiary of this man's insurance policy. Oh, and the prosecutors assert that she'd suffocated her own mother back in 2000, and was in the midst of cozying up to an elderly woman in ill health.
It's a sordid little tale that pokes a lot of holes in the "Midwestern values" theme, isn't it? The only clear winner in this is Elain Young's new boyfriend, who really seems to have dodged a bullet -- romantically and literally.