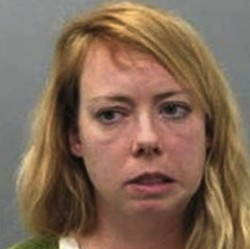 This week, news broke that Emily Hagan, a 31-year-old Kirkwood resident, has accepted a plea deal for a three-year sentence -- one year after she was accused of killing a cyclist while driving drunk in University City.

"Emily...wanted to accept the responsibility and she did," her attorney Art Margulis tells Daily RFT. "This was a tragic situation."

But what led to a plea deal that removed the DWI charge?

Margulis argues that it was a tough case for the prosecution.

As we reported last year, Samuel Scott, 19, was riding his bike home from work on a February night on Delmar Boulevard when Hagan apparently rear-ended him -- sending him to the hospital where he died the next day.

Police said Hagan's blood alcohol content was 0.262, which is more than three times the legal limit. That fact landed her charges of first-degree involuntary manslaughter and misdemeanor driving while intoxicated charges.

But this month, the manslaughter charges were reduced to a lower level felony and the DWI charges were dropped altogether as part of the plea deal that gave Hagan a three-year sentence.

Since that decision, Daily RFT had a chance to speak with her attorney who argues that the prosecution would've struggled had this gone to trial and not been resolved through a plea agreement.

"What's not being made generally known is how difficult the case was for the prosecution," he says. "It was pitch dark [that night]. There was a torrential rain and the street was under construction...and those were all factors that would've weighed heavily on a successful prosecution."

He adds, "Those were clearly critical factors that contributed to what happened."

Margulis says that she will be up for parole after about a year, but that there's no guarantee.

Asked if his client was glad to have the DWI charge dropped, he says, "I would say nobody is pleased about anything in this case.... It was a tragic situation.... We just worked it out the best way we could."