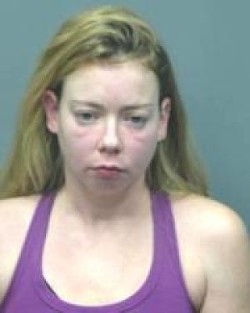 Emily Hagen's mug shot.
Emily Hagan, 30, has been charged with first degree involuntary manslaughter and misdemeanor driving while intoxicated in the death of bicyclist Samuel Scott, 19. Hagan allegedly had a blood alcohol content of 0.262, more than three times the legal limit of 0.08, on the February night when she rear-ended Scott in the 7400 block of Delmar Boulevard in University City.
Scott was bicycling home from his job at Dewey's Pizza the night he was killed. His life, along with the lives of all the other cyclists who have been injured or killed while riding their bikes, will be memorialized at the St. Louis Ride of Silence on Wednesday, May 16. If you cycle occasionally, often or just for fun in your neighborhood with the kids, please be cautious and aware at all times. That goes for motorists, also. A little caution can make a big difference.