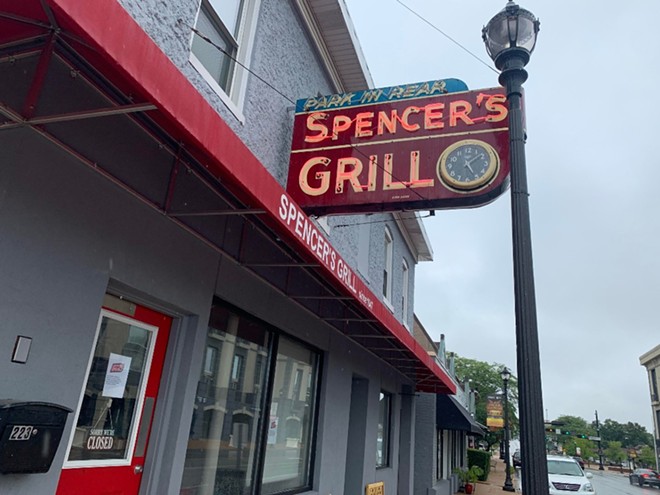 A Kirkwood breakfast and lunch mainstay is speaking out on social media this morning after what they say was Senate candidate Eric Schmitt's unauthorized use of their business in a campaign commercial.

Spencer's Grill, which has been in the heart of downtown Kirkwood for 75 years, appears briefly in two shots in a spot for Schmitt which debuted last March but is still being seen by Missourians on TV in the final week before the primary.

In one shot, as Schmitt says in his narration, "God created this wonderful country which has provided so much for so many," he is seen shaking the hand of a man wearing a Spencer's Grill T-shirt standing behind the diner's cash register.

However, earlier this week when one local man complained on Facebook about Spencer's getting involved in politics, the restaurant said it had explicitly asked Schmitt not to use its diner or logo in any sort of campaign advertisement.

"Eric Schmitt asked to use the diner for a private event, we agreed as long as our logo wasn’t used or it didn’t appear that there was an endorsement," Spencer's official Facebook account stated.

The post went on: "Being the stand up guy he is, he put our logo in the commercial against our wishes and took a T-shirt off our shelf and put it on one of his own people and had them act like a staff member."

The individual in the Spencer's Grill T-shirt is holding an order ticket as he shakes Schmitt's hand. 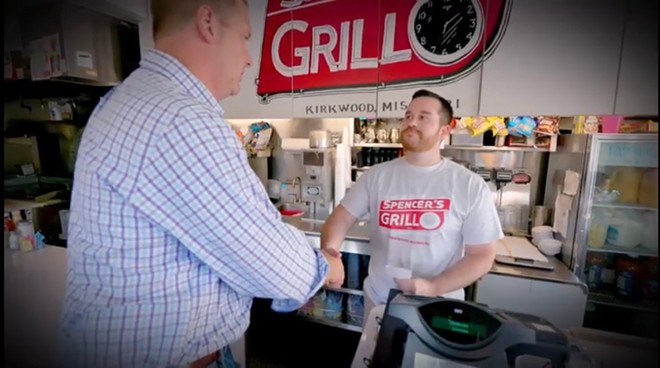 Screenshot via YouTube
Eric Schmitt shakes hand with someone posing as a Spencer's Grill employee.

Spencer’s Grill owner Alex Campbell told the RFT he believes Schmitt’s campaign captured the footage when the attorney general visited Spencer’s five to seven years ago for a “private meet and greet.” Schmitt ran for state treasurer in 2016 and served as state senator for Missouri’s 15th district from 2009 to 2017.

"We used to allow everyone from the community use our space, until this happened," Campbell tells the RFT. "We got burned by him and decided we need to keep our cards close to our chest."

Campbell thought Schmitt wanted footage of himself talking to constituents. He says he wasn't told Schmitt was filming a campaign ad, especially not one with the restaurant's logo included.

Campbell wasn't aware of the ad until someone recognized him from a video made by Schmitt’s then-campaign.

“At the time, Eric Schmitt asked me to attend the event and be included in the footage they were shooting,” Campbell recalls. “I declined to do that, insisting that this was not an endorsement from me or the restaurant. He was simply just allowed to use the space.”

However, Campbell says a man shown in the ad — positioned behind the counter and in a Spencer’s Grill T-shirt — has a stark resemblance to himself.

“They actually took a shirt off of our shelf and put it on a guy that looks just like me and staged him behind the counter, shaking Eric Schmitt’s hand, posing as an employee and what really felt like me as the owner,” Campbell says.

When he first noticed the ad some years ago, Campbell says it didn’t strike him as a big deal. Schmitt “wasn’t very well known” so he and his employees shrugged it off.

“And you can imagine how surprised and disappointed we are now seeing that footage from years ago being repurposed for his current campaign,” Campbell says.

In an email, Schmitt’s spokesman Rich Chrismer said, “It’s not our ad.”

The ad's disclaimer states that it was paid for by Schmitt's official campaign, "Schmitt for Senate," and a YouTube account titled “Eric Schmitt for Senate” first posted the ad on March 29, 2021. Chrismer did not address the RFT’s question as to whether this account was legitimate, however Schmitt tweeted the ad the same day it was posted to YouTube.

If you’re looking for a tough pro-Trump conservative to be your next US Senator then I’m your choice.

And footage of Spencer’s Grill logo appears in other videos on the Schmitt for Senate YouTube channel.

A poll from Emerson College Polling and The Hill released today showed that Schmitt was leading his GOP competitors with 33 percent of "very likely" Republican primary voters saying they preferred him. This represents a double-digit lead over Vicky Hartzler, polling at 21 percent, and Eric Greitens, whom 16 percent of those polled said they preferred.

Campbell says Spencer’s Grill has never endorsed a candidate or contributed to any political campaigns.

“We have made every effort to stay apolitical and feel like a welcoming place,” he adds. “We’re a family restaurant ... It’s frustrating to make efforts to stay out of all the politics and somehow still be dragged into it.”

Ryan Krull is a staff writer for the Riverfront Times. Find him on Twitter @ryanwkrull
More