As Kanye goes full anti-Semite, the GOP senatorial candidate calls for a double-bill with Kid Rock

Schmitt's decision to reveal himself as a Kanye fan at this exact moment has raised some eyebrows.

Kanye released his major label debut more than 18 years ago and has been a household name since at least 2009 when then-President Obama called him a jackass. However, yesterday appears to be the first time that Schmitt ever tweeted about the rapper. Which is weird, because as of about a week ago the Chicago-born producer-turned-rapper-turned-water-shoe-designer entered what might be called his Protocols of the Elders of Zion phase.

Schmitt didn't stan for Kanye when he rapped verses in "Through the Wire" despite having his mouth wired shut after a automobile accident, or when he beefed with Jay-Z and Pusha T, or when he dressed up as a bottle of Perrier on Saturday Night Live for his collaboration with the Miami-based Lil Pump. 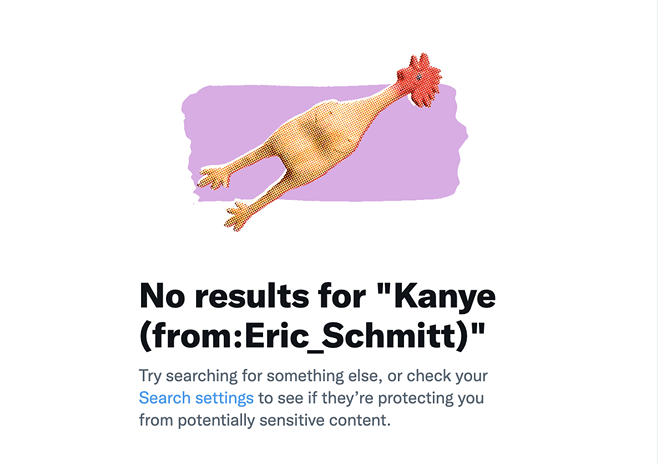 Well, in recent days, the rapper has espoused rhetoric that the the Anti-Defamation League calls "deeply troubling, dangerous, and antisemitic, period."

Five days ago, in fact, Kanye had his Instagram account restricted after he posted a message implying that P. Diddy was controlled by some sort of Jewish cabal.

Around the same time, Kanye also wrote on social media, “I'm a bit sleepy tonight but when I wake up I'm going death con 3 on JEWISH PEOPLE.”

He added, "The funny thing is that I can't be antisemitic because Black people are actually Jew."

While the ADL, apparently, would beg to differ, in outtakes from his recent interview with Fox News' Tucker Carlson, Kanye elaborated further on the latter theme, saying “When I say Jew, I mean the 12 lost tribes of Judah, the blood of Christ, who the people known as the race Black really are.”

The website Motherboard, which initially published the Carlson interview outtakes, called Kanye's beliefs a mash-up of ideologies similar to those espoused by the Black Hebrew Israelites, a group with some presence in St. Louis. The Southern Poverty Law Center describes them as a group that preaches "they and only they are the true Israelites of the bible and perpetuate the anti-Semitic belief that 'so-called' Jews have stolen their identity and 'birthright.'"

Elsewhere in the Carlson outtakes, Kanye expresses dismay that his kids go to a school where they celebrate Kwanzaa. "I prefer my kids knew Hanukkah than Kwanzaa. At least it will come with some financial engineering,” he said.

Schmitt's since-deleted tweet rooting for a Kanye-Kid Rock double bill, which came after all the above, drew swift condemnation.

Schmitt's opponent, Trudy Busch Valentine, wrote in response on Twitter, “It reveals a great deal about Eric Schmitt’s character that tonight he is openly embracing those who spew vile antisemitism.”

Attorney Elad Gross, who ran in the Democratic primary for Missouri attorney general in 2020, tweeted, "I campaigned all across Missouri. Unfortunately, in parts of our state, anti-semitism is very much alive. I spoke with folks who liked what I stood for but didn't like that I was Jewish. Missouri doesn't need leaders like Eric Schmitt who profit off of the divisions they sow."

Today, Schmitt issued a statement saying that he "wasn't aware of the recent comments and was was commenting on Kanye's recent interview with Tucker Carlson where he called out left-wing hypocrisy."

Schmitt added that he likes both Kid Rock and Kanye's music. He didn't specify which Kanye album is his favorite or, when it comes to Kid Rock, if he prefers the Pimp of the Nation's classic Devil Without a Cause work, or the vaguely blasphemous Rock N Roll Jesus, or the more recent, politically charged anthems like "Don't Tell Me How to Live."

Maybe Schmitt's love of Kanye stems from tracks like "Heartless" — the story of a man who lost his soul, coldest story ever told. Eric Schmitt can probably identify with that.