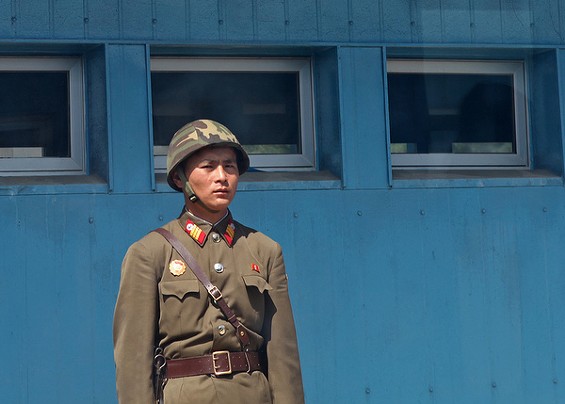 Roman Harak via Flickr, cropped
When North Korea is calling your country "a graveyard of human rights," you know something's wrong.

North Korea loves to hate on the United States. The armistice that stopped the Korean War in 1953 never really ended it, and Kim Jong-un's propaganda machine churns out anti-American rhetoric like we're still knee-deep in bloody conflict.

So it's not surprising that the isolationist regime released its own statement criticizing how law enforcement handled the massive unrest that took over Ferguson after officer Darren Wilson shot and killed unarmed eighteen-year-old Michael Brown. Quite the opposite. The last few weeks have been a North Korean propaganda minister's wet dream.

But that doesn't make North Korea's statement on the brutal police response to Ferguson protesters any less unsettling.

On Monday the Korean Central News Agency came down hard on America, especially on St. Louis police, for the heavy-handed military response to protests against police brutality.

"Police ruthlessly cracked down on protesters, leveling their rifles at them and firing tear gas and smoke shells," the statement says. "[The U.S.] should not seek solutions to its problem in suppressing demonstrators but bring to light the real picture of the American society, a graveyard of human rights, and have a correct understanding of what the genuine human rights are like and how they should be guaranteed."

With the pragmatic tone of a sociology professor, the North Korean mouthpiece explains the fury behind the protests -- something even some white Americans, especially FOX News anchors, struggle to understand: "The protests in Ferguson City and other parts of the U.S. are an eruption of the pent-up discontent and resistance of the people against racial discrimination and inequality deeply rooted in the American society."

But North Korea doesn't just want to shame America; North Korea wants America off its back. With defensiveness, sarcasm and a hint of a threat, North Korea's statement warns the U.S. that it should stop interfering with North Korea's rampant human-rights abuses if it can't keep its own people safe:

"The U.S. issued every year a report taking issue with 'human rights performances' of other countries as if it were an 'international human rights judge' but this time suffered disgrace and became a laughing stock of the world owing to what happened in it," the statement says. (Note: Where you see single quotes, imagine the North Korean writer giving a Frank Underwood-sized eye roll.)

"The U.S. had better honestly accept the unanimous accusations of the broad international community and mind its own business, instead of interfering in the internal affairs of other countries.... The U.S. should know that it is bound to get itself into a big trouble unless it behaves with discretion, not knowing where it stands."

Want to read North Korea's entire statement? Click to the next page.