Ever the Underdog, League of Women Voters Keeps Fighting 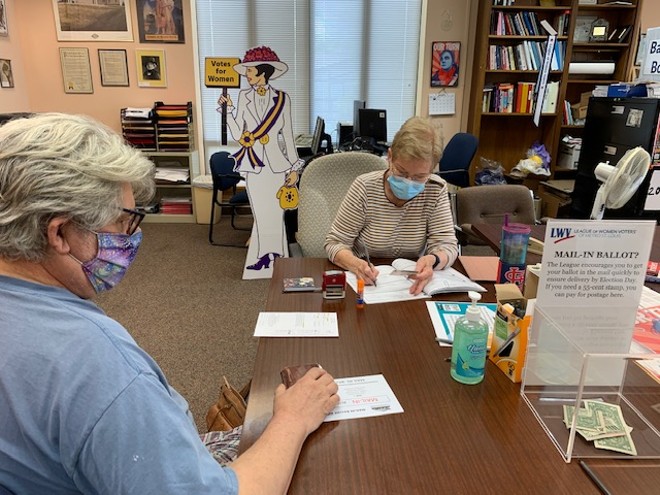 It was during a twenty-minute Zoom call with the RFT that Nancy Miller, co-president of League of Women Voters of Metro St. Louis, found out part of her organization’s lawsuit against Missouri was rejected by the courts.

As an off-camera coworker told her about it, her face dropped.

Taking a beat to absorb the information, she sighed and said, “that’s sort of been the name of the game.”

This was not the first time Miller has received such news. In fact, hearing that a judge has rejected her organization’s hard work has become second nature to her. Since the organization’s inception in 1919, it’s filed countless suits against the state. Usually, the organization comes up empty.

But this has never impeded the league's members before. At their office, calls pour in from St. Louis residents every few minutes, papers and law books are stacked up high on desks, and volunteers have started to come in on the weekends to help answer calls and assist voters. There is no time to dwell on the ways that the court has failed them.


In what the league considered a victory for Missouri residents, the state decided to make the voting process safer this year through introducing mail-in voting. However, the state saddled this decision with the burden of a notarization requirement. This is when the league decided to take action.

The organization, in conjunction with the NAACP, sued Missouri over the requirement for mail-in ballots to be notarized. The requirement, Miller says, is an unnecessary burden to place on voters in these stressful times.

With COVID-19 cases still flourishing, many chose to vote by mail-in ballot. But with the added step of notarization, some worry that has restricted voter turnout or even caused an increase of COVID-19 through in-person contact that could have been avoided.

The rules are also complicated, with different requirements for absentee and mail-in voters. The only exceptions for the notarization requirement are for those absentee voters who are incapacitated, inhibited due to disability or illness, or if someone is a caregiver for a person with these limitations. The league argues that there are many more issues to consider than these.

“There’s no logic to it whatsoever,” Miller says, “It targets a group that would face some hurdles getting to the ballot box, whether it’s their language, their transportation, their work schedule.”

When asked why she believes legislators are holding onto the need for notarization, Miller says, “Well, the judges obviously don’t think it’s difficult to notarize anything. They don’t have much empathy.”

The league is not the only group working to change the voting system. On top of their case, Missouri faced two other lawsuits similarly centered around voting access, each taking issue with the complicated nature of mail-in voting. More could be coming in the future, but the rules are now set for Tuesday's general election.

In the League of Women Voters' case, the court decided against eliminating the notarization requirement, or making any changes to the voting system before Election Day.

The organization's case made it all the way to the Missouri Supreme Court, which delivered its decision late last month. But the league hasn't given up, pushing beyond the state's high court with a federal appeal. Today, the case sits at the 8th U.S. Circuit Court of Appeals, awaiting a decision once again.

In the meantime, the organization's 550 members plan to continue working on voter access in Missouri. Even after a decision is made, Miller expects another lawsuit in their future.

“It’s the only thing we can do in Missouri,” she says through laughter, “We’re never out of a job.”