Everybody Do the Bartman (Movie)

You know what really makes me happy? Unhappy Cub fans. I know, it's probably mean-spirited, but I just can't help it. As a fan of the St. Louis Cardinals since I was old enough to understand the game of baseball, seeing the Chicago Cubs and their followers in abject misery is akin to supping upon the sweetest ambrosia. I try not to take such pleasure in other people unhappiness, but alas, as Popeye would say, I am what I am.
Thus, it is with an unhealthy amount of glee that I announce to you, the Rundown reading public, the sports cinema event of a lifetime.
Ladies and Gentlemen, I give you Bartman: The Movie.
Well, okay, so it isn't going to be called that, unfortunately. At least, not as far as I can tell. However, there is going to be a movie, and it is going to be about the greatest man who ever lived, Steve Bartman.
As part of its 30th Anniversary celebration, ESPN is commissioning a series of one-hour film documentaries, and one of them is going to feature the story of Bartman, the Cub fan who unwittingly became the Most Hated Man in Chicago when he stole a foul ball from the grasp of Moises Alou in 2003. I'm sure we all remember what happened after that; just in case any Chicago fans are reading this, I'm going to take the high road and not delve into it fully here.
Still, I just have to tell you all how excited I am about this. Finally, after all these years, we're going to get to see the inner workings of the man who has made our world so much better a place to live. After all, if he doesn't make that catch, who knows what happens? Perhaps the Cubs might just have won a-
No. I can't even bring myself to say it. It's simply too awful to contemplate, too horrible to speak of.
Sadly, it appears Bartman himself will not be part of the documentary, perhaps fearing to leave the safety of his self-imposed exile. It's a damned shame, I think, to see yet another truly great man forced to live in fear by the forces of ignorance and blight. First Salman Rushdie, and now Steve Bartman. Just a tragedy.
In fact, I think that just maybe now is the time for us to take action. As enlightened baseball fans, I believe it is high time we reached out to Bartman. After all, he's done so very much for us, and we've never given him anything in return.
Mr. Bartman, on behalf of Cardinal Nation, I would like to offer you asylum. Come to our city. Become a Cardinal fan. And in return, we will protect you. I know of many who would willingly lay down their lives to protect the man who prevented the Cubs from reaching the World Series. Do not live in fear any longer. Come out into the light and walk with your head held high. The city of St. Louis, and all Cardinal fans everywhere, will welcome you with open arms. You can even sleep on my sofa if you like. It isn't very comfortable, and is currently claimed by a very large and very mean tabby, but she usually just sleeps at the one end, so you would have literally like four and a half, maybe even five foot of space all to yourself! Try getting that sort of offer from Switzerland.
click to enlarge 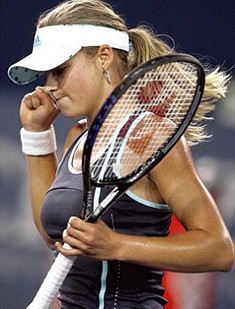 vtennis.co.uk
Maria Kirilenko deserves to have the story of her triumphant shower last week told, and I'm just the man to tell it.
And just in case there are any ESPN executives reading this, I am, in fact, available to make a documentary about the hottest female tennis players ever. I have my own video camera, and am willing to make any sacrifice necessary to record these creatures in their natural habitat. And by natural habitat I mean the shower. I'll be right here by the phone. Come on, ESPN. You only turn 30 once. Don't blow it by not taking advantage of this once-in-a-lifetime opportunity.