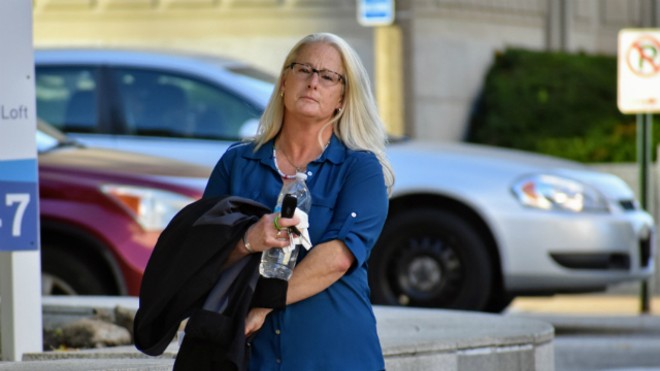 An ex-St. Louis cop convicted in a "rough ride" case was sentenced today to two years probation and ordered to complete an anger management class.

The veteran officer was tasked on August 2, 2018, with driving a couple of unruly drunks to the department's south patrol station for processing. By all accounts, the men insulted Wozniak in particularly nasty terms. She reportedly told other officers the two were "assholes" and she was going to slam on her brakes at every stop sign — an old-school cop tactic that sends handcuffed, unbuckled prisoners banging around inside of a cruiser or transport van.

She didn't brake at every stop sign, but she got in one good lick toward the end of the trip. As they neared the south patrol station, Wozniak suddenly jammed on the brakes, flinging her passengers forward on the metal bench seat. One of them smashed his face against a metal grate, opening a bloody gash above his eye

Wozniak later claimed she was braking for a dog. However, the van's dash camera did not show any dogs in her path.

Assistant Circuit Attorney Jeffrey Estes, who prosecuted the case, asked Judge Lynne Raynard Perkins to impose a suspended sentence of 90 days — 30 days for each victim and 30 days for "lying about the dog" — and two years probation.

But Perkins opted for two years probation with the option to impose a sentence in the future if Wozniak violates the terms, which includes a ban on possessing a gun. He said he agreed with the former officer's attorney, Brian Millikan, that Wozniak "received some punishment in that she has sacrificed her seventeen-year career."

Millikan noted in court that he had recently learned Wozniak will face a civil lawsuit as a result of the incident.

Wozniak declined to comment after the verdict but told reporters to "stay safe."