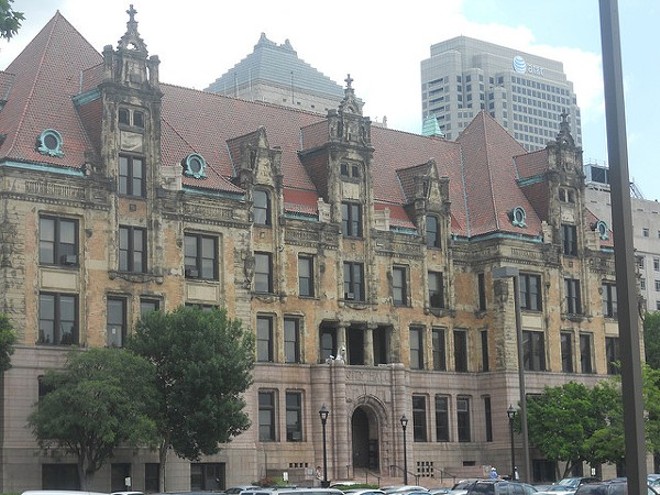 COURTESY OF FLICKR/VALERIE
St. Louis City Hall could be seeing a familiar face in the future: The city's longtime excise commissioner.
On Monday, St. Louis' former excise commissioner, Bob Kraiberg, got the news he's been waiting for since March 2016 — the city must give him his job back and pay his full salary and benefits for the nineteen months he was out of work.

For Kraiberg, who held the job supervising the city's liquor licensing for 30 years before being unceremoniously fired by then-Mayor Francis Slay, the judge's ruling is vindication of what he argued all along: that the city had no right to terminate him without cause.

And the timing couldn't have been sweeter.

"After nineteen months, it happened on my birthday," Kraiberg told the RFT yesterday. "I will admit, I had a few glasses of wine last night."

The decision in Kraiberg's lawsuit against the city was issued by Circuit Court Judge Robert Dierker four months after a hearing in which both parties made their case. Koran Addo, a spokesman for Mayor Lyda Krewson, said that the city was aware of Dierker's order. "We are reviewing it, and we are discussing our options," he says.

While the judge's order gives Kraiberg his job back, it's not quite so simple. The city has since hired a new excise commissioner.

Still, Kraiberg says he's ready to go. "I have a lot of respect for the new mayor," he says. "I've known her a long time."

Indeed, Kraiberg was a fixture at City Hall for years. Hired during the administration of Mayor Vince Schoemehl, he survived three decades, four mayors and fourteen public service directors before getting the boot in March 2016.

At the time, Kraiberg had pushed back a hearing on a 3 a.m. license for the Ready Room. The bar's owner had called Slay to complain, and in no time, Kraiberg found himself bounced — and informed that the mayor had every right to fire him, reason or no reason.

As evidence, the city pointed to a 1905 ordinance that says the excise commissioner is appointed by the director of public safety and can be removed, with or without cause, by that person or the governor.

But Kraiberg argued that civil service rules promulgated in the 1940s canceled out that ordinance, and that the city could only fire him for cause. Ultimately, Judge Dierker agreed, awarding back pay to boot.

Today, it's not just a legal victory but a moral one. "They took my job, my life insurance, my health insurance and my pension and threw me in a trash heap behind the bar, all because they thought they could," Kraiberg says. "Well, the moral of the story is, don't let bullies push you around."

Kraiberg says he fought the case in part to clear his name. "My son has my last name," he says. "When they say, 'Why did your dad get fired? It must have been bad — so bad they couldn't even say.' I wanted to let my son and the world know, I didn't do a thing wrong. This was a witch hunt, and I'm not going to let them sully my name like that."