Family of Michael Brown, Teenager Shot to Death By Ferguson Police, Talks About His Life 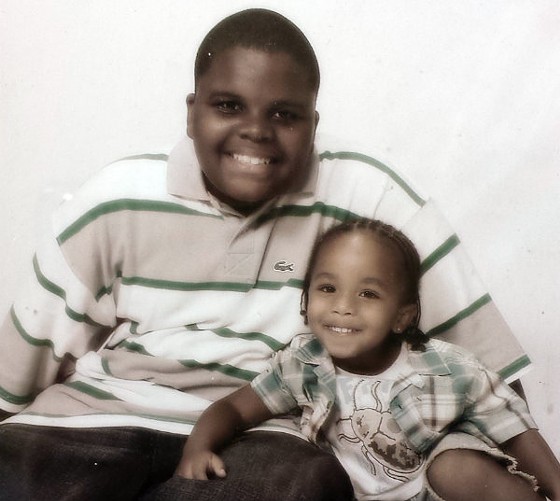 "We don't want that out there," said Eric Davis, Brown's cousin. "His body was in the street for hours."

The second is that Brown was a shy, nonviolent kid who loved music and wanted to go to college.

"He was excited about life, and he was just so proud when he graduated, got his diploma. Everybody was," said Desuirea Harris, Brown's grandmother.

On Saturday at about noon, Brown was walking with a friend on the 2900 block of Canfield Drive when they came across a Ferguson police officer. Accounts differ about what exactly happened, but Brown ended up lying face down in the street in a pool of blood, shot repeatedly by the officer, a six-year veteran who has yet to be identified. Brown did not have a weapon. Witnesses at the scene told the media that Brown had his hands in the air when he was shot -- some described the shooting as "execution style." At a press conference on Sunday morning, St. Louis County Police Chief Jon Belmar gave the (very brief) official version of what occurred, accompanied by Ferguson Police Chief Thomas Jackson, who did not speak. St. Louis County is in charge of the investigation. Here's what Belmar told reporters:

One of those individuals at the time came in as the officer was exiting his police car. Allegedly pushed the police officer back into the car where he physically assaulted the police officer. It is our understanding at this point in the investigation that within the police car there was a struggle over the officer's weapon. There was at least one shot fired within the car after that. The officer came back out of the car, he exited his vehicle, and there was a shooting that occurred where the officer in fact shot the subject, and the subject -- they were fatal injuries.

Belmar confirmed that all the shots fired came from the officer's weapon and that though he does not have the final count, Brown was struck "more than a couple" times. He also confirmed that Brown did not have a weapon. A medical examiner will have a report in the coming weeks.

The scene outside the press conference at the Ferguson Police Station was at turns angry, sad and chaotic. The most charged moments occurred when a rumor swept through the crowd that the boy who Brown was with when they encountered the police officer was found dead behind a Domino's Pizza. After a few tense moments, Chief Jackson tried to assure the crowd that those reports were false, and that though the boy hadn't yet been interviewed by St. Louis County police, he was alive and with his parents.

In the late morning, Michael Brown Sr. arrived outside the station with other family members, looking drained. "I just want justice for my son," he said.

"He wasn't a violent person. He was peaceful," said Elizabeth Spivey, Brown's aunt. "He was a gentle giant. He looked like he could really do something but he wouldn't. He was a big teddy bear."

Over on Canfield Drive, about ten minutes from the police station, two orange cones marked the place where Brown fell. An empty liquor bottle sat in the middle, crushed rose petals mark the street red.

Belmar's description of events didn't make sense to Brown's 21-year-old cousin, Anthony Livingston, a manager at the Family Dollar and a cook at Bailey's Range. He was standing near a growing stuffed animal memorial, holding his four-month-old son. Livingston said he was Brown's best friend.

"I can't believe it was him. It hurt real bad, because I gotta face his mother and his grandmother," he said. "He was just a kid. He had dreams, big dreams. All he wanted to do is make music."

Jessica Lussenhop
A photo of Mike Brown as a little boy, being kissed by one of his siblings. To the right is a jar he filled with rap lyric ideas.

Livingston walked Daily RFT down Canfield to the low-slung apartment buildings where Brown was living with his grandmother. In the dimly lit front room, the family spoke fondly of the teenager. Some of them sat on the couch that he used as his bed. They say he slept like a rock on it, despite his big frame.

After he graduated Normandy High School in the spring (a struggle, Livingston said, but Brown did it for his mother), Brown was spending his summer trying to figure out what the next step was. Livingston was trying to get him a job working with him at Family Dollar. Brown was also supposed to begin classes the next week at Vatterott College. He wanted to study music and sound engineering.

"He wanted to go there and do the music thing, he also wanted to go to another college because he wanted to play football. His coach at his school in Normandy said that he could do that, get into a college playing football," said Harris, Brown's grandmother.

Livingston said that it had been a good summer so far for Brown. He'd graduated and seemingly overnight, went from a shy kid, kind of a loner who spent a lot of time playing PlayStation 3, to being obsessed with becoming a famous rapper. He said after Brown started getting positive feedback from songs he posted on social media -- ones he recorded in a studio set up in his grandmother's basement -- he started coming out of his shell. Brown worked tirelessly to put out more and more music. He chose the performing name "Big Mike."

"That's what I liked about him. I'm 21 but he was so wise and smart, I gravitated to him," said Livingston. "If he say he going to do something, he put his mind to it."

Even though he seemed to be going through a transformation, the family agreed that in general Brown was shy.

"He was quiet. He didn't have too many friends," says Livingston, who used to live right next door to Harris and Brown. "He used to tell me, 'Man, you're my only real homeboy.'"

"The only person he hung out with was her," chimes in Pam, a family friend, gesturing to Brown's grandmother who nods her head silently.

More and more people began to filter into the house. Alderman Antonio French came in briefly to inform Harris that somebody offered to pay for Brown's funeral. A local pastor and several helpers trooped in with cases of soda and hot takeout food. The pastor handed Harris an envelope with a check inside to help with whatever the family needs. Brown's mother, Lesley McSpadden, entered wearing dark sunglasses -- she didn't want to talk to the press and disappeared into a back room. Next came two young girls -- one, Livingston whispered, is Brown's girlfriend. When she started to cry, someone pulled her into another room and closed the door. Harris got up to join them.

After a few minutes, Livingston said the family was likely discussing what to do next, whether to get a lawyer and how to combat the narrative being put out by Ferguson police. He got up and brought back a jar. This, he said, is where Brown kept his rap lyric ideas. The jar was stuffed full of white scraps of paper with fragments of sentences, snippets of thoughts, written in loopy handwriting.

"My city why people so petty/I rised from the Dead/now you can't look me in my eyes," read one.

"Because you neva Believed in me GONE," said another.

And another: "Grandma raised me better than that."

Livingston brought out an iPad mini and started flipping through Instagram posts by celebrities like Russell Simmons, Souljaboy and Young Jeezy all talking about Brown. They posted things like, "I am Michael Brown."

For more on the response to Brown's death, read our follow-up story about the peaceful Ferguson vigil that turned into a riot.