Father Lawrence Biondi to Step Down Sept. 1: "I Leave SLU in A Very Strong Position"

At a Saturday night gala in May, Father Lawrence Biondi, the embattled president of Saint Louis University, announced that he would be stepping down -- after many months of protests and high-profile resignations. Immediately after the announcement, questions lingered about when Biondi would actually retire as president and make way for the new leadership his growing group of critics have sought.

On Friday, SLU announced that Biondi will step down effective September 1 -- sooner than some anticipated.

"Over the summer I decided that the time is right for me to retire," Biondi says in a statement. "While I will miss the mission, work and activity of the University, I am also looking forward to new challenges that lie ahead for me. I leave SLU in a very strong position, and I look forward to continuing to provide input to the Board as it searches for my permanent successor."

Biondi, who has held the position for more than 25 years, will be stepping down just about one full year after faculty overwhelmingly voted no-confidence in him, paving the way for months of steady controversy.

The news comes from Saint Louis University Board of Trustees Chairman J. Joe Adorjan who says that Biondi made the decision to step down next month. He will be named president emeritus and will take a one-year sabbatical from the university.

"Father Biondi has let me know of his desire to make a change and to help us transition to interim leadership as we begin the search for the next president of SLU this fall," Adorjan says in a statement. "I have the greatest respect and admiration for Father Biondi and for all that he has done for SLU, and I am hopeful that as we soon begin the search for his successor that he can continue to provide his knowledge and insight to the Board. We all owe a great debt of gratitude to Father for giving so much of himself to make SLU the outstanding and respected institution it is."

Adorjan sent a letter to faculty, students and staff on Friday announcing the change and noting that William Kauffman -- who is SLU's vice president and general counsel -- will be stepping up as interim president for the coming academic year. He will not be a candidate for the presidency, Adorjan says.

Kauffman has been SLU's general counsel since 1995 and also serves as secretary to the board of trustees.

Kauffman made headlines earlier this year when, as general counsel, he threatened Steven Harris, a professor in the department of math and computer science, with legal action after Harris distributed a faculty survey on Biondi. The American Association of University Professors slammed the threat, which, Kauffman brought forward on copyright infringement grounds. 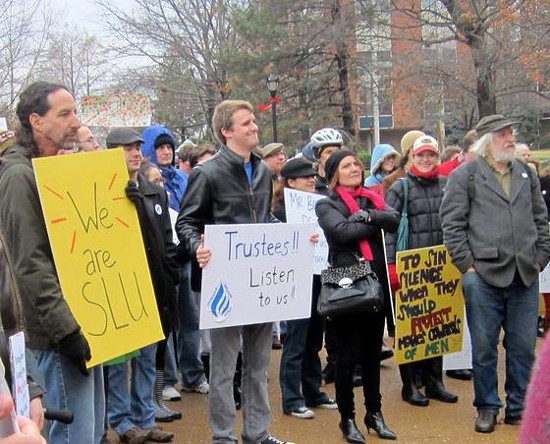 via Facebook / SLU Students for No Confidence
Biondi protesters.

SLU will soon establish a search committee of trustees, faculty, staff and students and formally launch the process of finding a new president after September 28.

This latest announcement comes just weeks after faculty accused the president of punishing those who opposed him with reductions in salary increases.

Binodi addressed those accusations in a Post-Dispatch op-ed, saying, "It is important to note that no one's salary was cut this year and that all of the faculty members who are complaining received salary increases, although they may not have received what they desired or what they think they deserved.... Overall, Saint Louis University is providing approximately $13.4 million in salary increases this year. And, let's be clear: Out of SLU's more than 4,200 full-time faculty and staff, there are complaints from about 16 people, or just about one-third of one percent."

He concluded that piece, published just a week before his resignation date was announced, saying, "Enough of the drama! Enough of the theater!"

From our coverage back in May, here's footage of Biondi announcing his retirement (with the news dropped at the 13:50 mark):

And here's the full letter from Adorjan.

Message From the Chairman of the SLU Board of Trustees