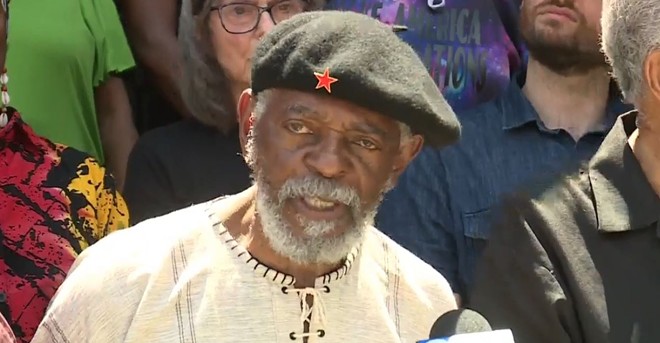 At a news conference Friday, Chairman Omali Yeshitela said he and his wife were handcuffed during the raid as investigators searched their home. He said the FBI threw flash grenades into his home and performed the raid without knocking or showing him a search warrant.

Yeshitela said the FBI believes the Uhuru Movement and African People’s Socialist Party may somehow be involved with Russia’s tampering in U.S. elections.

“What they have claimed is that they are indicting someone, a Russian nationalist who is in Russia,” Yeshitela said. “They have claimed that they were investigating the African People’s Socialist Party that I lead in the Uhuru Movement because of some association that we might have with the Russian government.”

The raid appears connected to one in St. Petersburg, Florida, that occurred around the same time Friday morning. The Tampa Bay Times reports that federal law enforcement and St. Petersburg police performed searches at multiple locations, including the Uhuru House in Florida, under search warrants seemingly related to an indictment against a Russian national.

According to a federal indictment obtained by the Times, Aleksandr Viktorovich Ionov is alleged to have worked with unnamed officers of Russia’s Federal Security Service to use members of U.S. political groups as foreign agents of Russia.


Ionov recruited members of various political groups to attend government-sponsored conferences in Russia to encourage participating groups to advocate for “separating from their home countries,” the indictment states.

The indictment does not explicitly name Yeshitela or the African People’s Socialist Party but describes two co-conspirators as residents of St. Petersburg, Florida and St. Louis.

The indictment against Ionov identifies him as the founder and president of the Anti-Globalization Movement of Russia, a Moscow-based organization that advocated for “sovereignty of nation-states including the sovereignty of Russia.”

Yeshitela said he visited Russia in 2014 as part of a conference organized by a Russian organization that dealt with an anti-globalization movement in Russia, but his involvement with the country did not extend beyond that.

“This movement had conferences in Russia, organizing peoples from around the world who were opposed to globalization and who were struggling for self-determination,” Yeshitela said.

Yeshitela founded the African People's Socialist Party in 1972. According to its website, party members aim to free African and oppressed populations from "U.S. capitalist-colonialist domination."

The Uhuru Solidarity Movement is an organized group of white people who stand in solidarity of Black liberation under the leadership of the African People's Socialist Party. FBI raided the group's Uhuru Solidarity Center in south St. Louis.

Yeshitela explained his party is not composed of pacifists; they believe in “just wars” that are “fought by people who are trying to liberate themselves.”

“We don’t just support Russia in this war against Ukraine, we support Palestine, even as the U.S. government and U.S. citizens are leaving this country every day, going to Palestine that is murdering Palestinian Arabs on a daily basis."

Yeshitela added: “Don’t tell us that we can’t have friends that you don’t like.”

When asked if he had ever accepted money from the Russian government, Yeshitela replied, “No,” but laughed and said he "apologizes for not receiving money from Russia.”

Rhya Fogerty tells the RFT that the FBI took the phones and laptops of some involved with the movement. Fogerty works with Black Power Blueprint, an initiative connected to the African People's Socialist Party with a mission to transform north St. Louis.

"The whole thing is about the right of African people to be free; to be in control of their labor, land, communities, resources," Fogerty says. "The government makes these things out to be so convoluted."

This is a breaking story. We will provide updates when more information becomes available.