Fear and Loathing in Collinsville: In Search of the "Real" Randy 'The Ram' Robinson

Send a News Tip
In the movie The Wrestler, Necro Butcher memorably assaults his opponent Randy "The Ram" Robinson (played by actor Mickey Rourke) with a staple gun, barbed wire and plate-glass window.

And while Rourke is no longer manhandling "heels" inside the square circle, Butcher remains a very real wrestler (well, as "real" as you get in the choreographed world of pro rasslin') with the underground outfit known as Ring of Honor.

Last Friday the wrestling franchise pulled into Collinsville and I had to see for myself if Ring of Honor is as wild and gory as it's been portrayed on the silver screen. 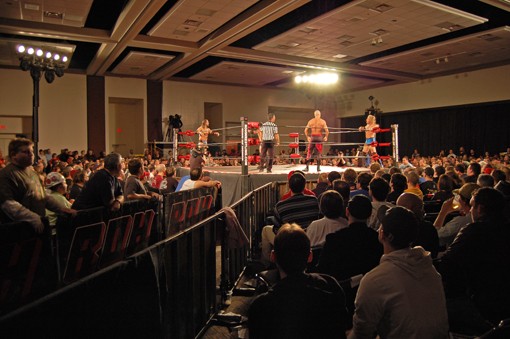 Ring of Honor doesn't have a cable TV deal, and full-length fight clips are almost impossible to  find online. Instead, ROH has grown primarily due to the word-of-mouth enthusiasm of hardcore wrestling devotees -- 600 of whom showed up for Friday's match in a convention-center multipurpose room perhaps better suited for hosting wedding receptions and trade fairs.

First impresson: The real-life ROH is far from the nightmarish matches portrayed in Rourke's Oscar-nominated film. And sadly for sadists, Necro wasn't in Collinsville (he was fighting in Japan), and no other wrestler bothered to bring a staple gun. 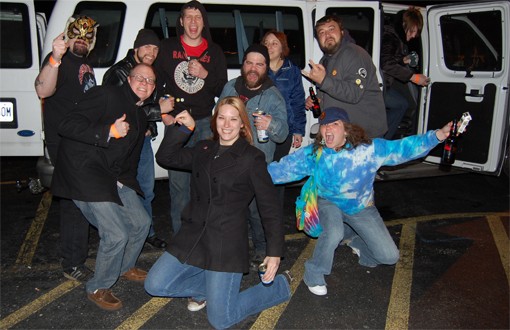 ROH fans parking lot it during an intermission.
But like Rourke's character from The Wrestler, ROH is full of plenty of "old timers" forced to wrestle because it's the only thing they know. One such warrior, Jerry Lynn -- "spelled just like a girl's name," he jokes -- has been grappling for 21 years. 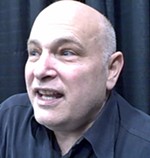 Mike Greenblatt
Mike Greenblatt, the breathless publicist for ROH, is quick to liken moments in Lynn's life to that of Rourke's Randy "The Ram" Robinson character.

"(Lynn) has had some life experiences like Randy the Ram, right down to the stripper," Greenblatt gushes before going to find Lynn in the strictly off-limits "backstage" area. Lynn, on the other hand, isn't so quick to compare himself to Mickey Rourke's character, but says there are similarities between "The Ram" and ROH wrestlers out there.

Jerry Lynn
"Old timers like me, I guess we see a lot of parallels," Lynn says, as the song "Mother" by Danzig blares over the house PA. "Unless you've made it big-time and had your big money run, it all comes full circle. You start on small independent shows, trying to get noticed -- and I did that -- I did work for the big-time, but I never had the big money run.

During his match, the second-to-last of the night, Lynn is treated by the fans like the war horse he is -- "Jerry! Jerry! Jerry!" they shout. It sounds like the call of the Jerry Springer Show, but has the heart of 500 males in full-on "bromance." 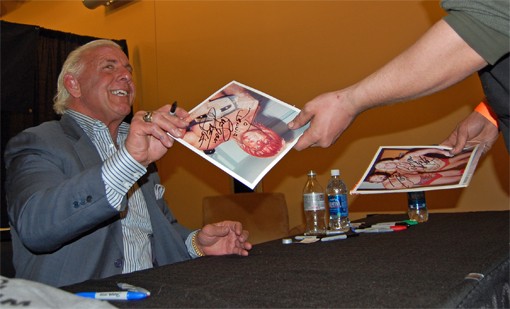 Ric Flair will sign a photograph of himself covered in blood for $30. Smiles are free.
However, Lynn's not the biggest draw of the night. That honor belongs to 60-year-old Ric Flair, a former world champion and icon in this world. The red-faced, bleach-blond relic is still a large, intimidating presence. He signed autographs before the match with more than 100 or so fans queuing up to meet the "Nature Boy."

Flair later took to the ring during a staged confrontation with ROH champ Nigel McGuinness. The champ questioned Flair's abilities as a husband. Flair, meanwhile, shot back: "Ladies of St. Louis, the Nature Boy is out tonight!," he announced before letting out his trademark "Wooo!" 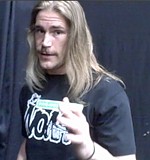 Chris Hero
A younger grappler, Chris Hero, tells me about the time researchers with The Wrestler hung out in the locker room during an ROH match in Manhattan. Hero, like most of the wrestlers, lets his straight blond hair flow past his shoulders.

"I think it's just the tip of the iceberg," Hero says of the movie involvement and mentions that ROH recently signed a deal with broadcaster HDNet.

Hero -- whose nickname is "That Young Knock-Out Kid" -- has a signature move called the "Mafia Kick" and he is more than happy to show it off prior to his match.

"I just rear back and fuckin' kick the guy right in the face," he says as his leg rises high into the air.

Like Lynn, Hero works an interview camera easily -- though not as easily as he works up his fans. During his introduction later in the night, Hero and his tag-team posse parade down a metal ramp to the bass-heavy beats of hip-hop music. After dispatching his opponents in a long and melodramatic battle, a triumphant Hero struts his way back to the locker room.

The losers follows a few minutes later, showered in boos. A teenager in a Zelda shirt (who's been enthusiastically leaning over the barricade all night) gives one of the vanquished a hard, backhanded smack on his bare chest. The crowd gasps, awaiting a response.

"I'll fuckin' kill you!" says the sweaty wrestler. The kid spits back in the wrestler's face, and the wrestler, who's had enough, just walks back up the ramp and disappears behind a door.

Another day, another paycheck inside the Ring of Honor where -- just like The Wrestler -- not every ending is a happy one.