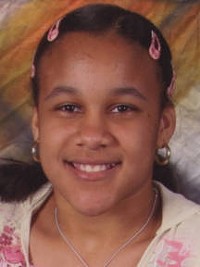 But though Valdez, Speller 155, successfully spelled "pegasus" and "strathspey" in Rounds 2 and 3 of the competition, she did not advance to tomorrow's semifinals.

But in a way, Valdez's presence at the bee is a victory in itself: Four years ago, when she immigrated here from the Dominican Republic, Valdez couldn't speak, let alone spell, English.

Now fourteen and an eighth-grader at Ferguson Middle School, Valdez took ESL classes but supplemented them by reading on her own, even if she didn't understand everything, and watching American TV. In sixth grade, she discovered she had an affinity for spelling and won the school bee for the first time.

Valdez practices spelling by memorizing Greek and Latin word roots. She often doesn't bother to learn what some of the words mean, she told NPR's Michel Martin, because that would take too long.

For more on Valdez, listen to Martin's NPR interview here.

If you want to show Missouri pride in tomorrow's semifinals and finals, cheer for Brent Henderson, 14, of Blue Springs. St. Louisan George Abraham Thampy won the bee in 2000 with "demarche" (a diplomatic or political maneuver).

(Note: my computer spellchecker has decided both of Valdez's words are mispellings. A pegasus, incidentally, is a mythical winged horse and a strathspey is a Scottish dance that is like the reel, but slower.)