Ferguson Municipal Public Library Is 2015 "Library of the Year" 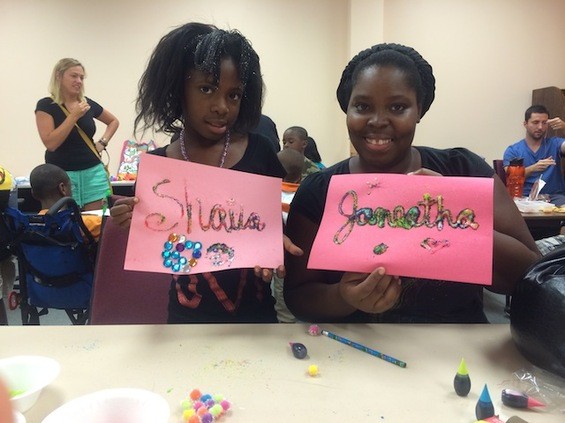 Photo by Mitch Ryals
Shaila and Janeatha Evans were among the many Ferguson residents who came to the library after unrest closed the schools. Here they show off their art projects to RFT journalist Mitch Ryals.

The Ferguson Municipal Public Library is the 2015 Library of the Year.

The $10,000 prize, officially titled the 2015 Library Journal/Gale Cengage Learning Library of the Year, was announced yesterday. The award is given to the library that "most profoundly demonstrates service to the community, creativity and innovation in developing specific community programs or a dramatic increase in library usage; and leadership in creating programs that can be emulated by other libraries."

Naturally, the library's role in serving the community during the unrest that gripped Ferguson last summer was what caught the judges' eye.

The library had just one full-time staffer. But its volunteers and part-time workers kept the place open even when organizations with much greater resources locked their doors.

"The Ferguson Library provided the example for all of us to live up to. It behaved as all of us hope that we would behave if confronted by a similar situation," Steven V. Potter, director and CEO of the Mid-Continent Library System in Independence, Missouri, wrote in his nominating letter.

In a cover story that hits subscribers next week, The Library Journal extolled the library's courage under fire:

When the first outbreak of civil unrest occurred in August 2014, [Library Director Scott] Bonner was in just his fifth week on the job. It would have been easier to close the library as many expected. Instead, Bonner had the courage and commitment to the community to keep FMPL open and to partner with teachers and community agencies to provide education, information, and emotional sustenance to the citizenry, including its children.

As the story unfolded and the library stayed open, FMPL became an icon of constructive engagement and Bonner an unofficial ambassador of this important aspect of the library's mission in a community in turmoil.

As for Bonner, he told the Library Journal that he didn't do anything different than most libraries would do in a moment of crisis: "I think libraries step up all the time."

Hear, hear! Forget the stereotype of bookish introverts; in our experience, librarians are some of the toughest First Amendment champions in the country. They've bravely battled censorship and some of the most noxious provisions of the Patriot Act; a little rioting couldn't possibly stop them.

Props to Bonner and his staff for proving that you don't have to carry a big stick, much less be dressed in riot gear, to do your job in times of chaos and confusion. We could all learn something from the grace they showed in St. Louis' toughest hour.