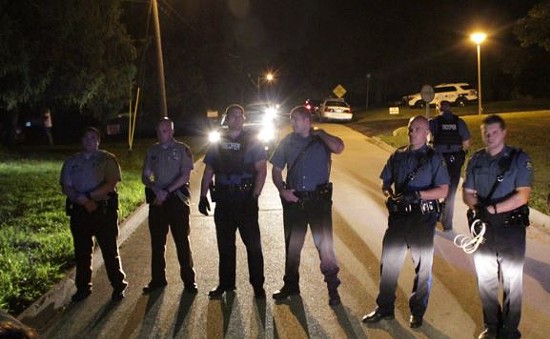 This post is being updated live, includes information on second officer shooting on I-70.

Law enforcement authorities confirmed with Daily RFT that a Ferguson police officer was shot near the intersection of Stein and West Florissant on Saturday evening.

Missouri Highway Patrol Captain Ron Johnson appeared briefly on the scene to address protesters and reporters. He told the group that the officer was the only person shot -- this seems to be an attempt to squash rapidly spreading rumors that the shooter was killed by police.

"A police officer's been shot tonight," he said. "That's the only person that's got shot."

Click here for our complete archive of coverage from Ferguson.

Update 10 a.m. Monday: The law enforcement narrative of the first shooting on Saturday night of Ferguson police officer has changed. Sgt. Brian Schellman confirmed to Daily RFT they are only seeking one suspect, not two, and that no burglary appears to have taken place.

"The information we had at the time of the first press briefing was two subjects, so the Chief was going on what he was told," Schellman wrote in an email. "As you know these scenes are very fluid."

Schellman also told the Post-Dispatch that although the wounded officer did have a body cam, it was not turned on. Here's the statement on that from Ferguson Police Chief Tom Jackson given to KSDK:

At that time, the building was supposed to be empty. He was not expecting to have interaction with anyone and did not have his body camera activated for the routine building check.He was suddenly attacked after interrupting a burglary attempt and sustained an injury from a gunshot. Generally, the body cameras are utilized with any interaction with members of the public and in any situation when an officer feels it is necessary, and has the opportunity to activate the camera.

A Ferguson police officer was shot in the arm at about 9:25pm last night after coming across a burglar in the Ferguson Community Center while conducting a building check. The suspect is a black male with a dredlocks and remains at large.

Update 2:30 a.m.: The full statement on both shooting incidents from a spokesman for the St. Louis County Police Department:

Later in the evening, at approximately 12:10 AM Sunday morning, the St. Louis County Police Department received a separate call for another shooting, this time involving an off-duty St. Louis City Police Officer on Interstate 70 near 170. The off-duty police officer was driving his personal vehicle westbound on Interstate 70 between Hanley and 170. The officer was travelling in the right lane when a vehicle began passing him on his left. An unknown number of occupants in that vehicle were armed with handguns and began firing multiple shots at the off-duty officer's vehicle. The officer's vehicle was struck numerous times, however it does not appear the officer suffered any gunshot wounds. The officer sustained minor injuries from glass breakage and was treated at a local hospital. The off-duty officer did not return fire. The officer was wearing his uniform pants, but was not wearing his uniform shirt. It is unclear at this time if the officer was targeted or if this was a random act of violence. The St. Louis County Police Department's Crimes Against Persons Unit is also conducting this investigation.

Both of these investigations are ongoing and any further information will provided at a later time.

Update 1:50 a.m.: An update on the second incident on I-70 from the St. Louis Metropolitan Police Department:

The incident occurred at 12:20 a.m. The officer is a 48-year old male with nearly 20-years of service. The officer suffered a minor injury to his arm from broken glass. The officer is being treated at the hospital. He did not return fire at the suspects. The investigation is ongoing.

Update 1:20 a.m.: Daily RFT just spoke with St. Louis County Police spokesman Sergeant Brian Schellman. He said investigators are still in Ferguson and Dellwood and will be for some time looking into the first officer shooting. He said there is no one in custody on that case.

He also updated us on the situation on I-70, which occurred on the westbound side between the Hanley and I-170 exits. Schellman said the officer was in the right lane when a vehicle approached his from one or two lanes away.

He characterized the officer's injuries as "minor." Daily RFT asked if there was anything on the vehicle that would have made it clear that he was an off-duty police officer and Schellman said no.

"There is nothing on the vehicle like that and that's what we're trying to figure out here -- did somebody know he was a policeman or was this just random?"

Update 1:10 a.m.: It now appears that the off-duty police officer involved in a shooting on I-70 was a St. Louis Metropolitan Police officer. Here is the statement from police spokeswoman Shron Jackson:

St. Louis County PD advised that an off-duty St. Louis City officer was injured as three Black male suspects fired shots into his personal vehicle at I-70/I-170. The suspects fled in black sedan. It appears the officer's injuries are not the result of gunshots, but broken glass.

Update 1 a.m.: Multiple reports are now coming in about a second officer -- this one off duty -- being shot on Highway I-70. The road is swarmed with police who appear to be searching for something. Ferguson spokesman Devin James confirmed the second shooting, but had no details to disclose.

Cars are turning around on I-70. Police are searching for something on the ground. pic.twitter.com/A284kPHueQ

Update 12 a.m.: St. Louis County Police Chief Jon Belmar just addressed reporters. He said the officer injured tonight was by himself near Hudson and Smith at about 9:10 p.m. when he saw two male suspects running from him. The officer pursued the men westward on foot, and when he got close one of the men opened fire and hit him in the arm. Belmar said he spoke to the officer briefly at the scene.

"He was able to get a couple shots off. I don't know what that means other than a couple shots," Belmar said. "There's no indication either suspect was shot."

St. Louis County police were asked to come in and investigate the shooting. The chief said the officer will be interviewed further after he is out of treatment and he is currently in an area hospital. Belmar concluded by saying he does not believe the incident had anything to do with the protests.

Update 11:30 p.m.: A short statement from City of Ferguson spokesman Devin James: "Officer interrupted business being burglarized. The suspect shot once striking officer in the arm and ran." He added that they are not disclosing the name of the business at this time, and that the injured officer is male.

From what we know so far, it seems an officer was shot in the arm and that he or she will recover.

Mike O'Connell, communications director for the Missouri Department of Public Safety wrote in an email to Daily RFT that his agency is not handling the investigation, but he shared what he's been told:

A search is underway for the suspect in the shooting of the officer. The officer's injury is non-life threatening. This is near the community center and a bit away from the area of the protests. St Louis County Police is handling the investigation and media.

This is a breaking news story and we'll continue to update as we learn more.

Danny Wicentowski contributed to this reporting.